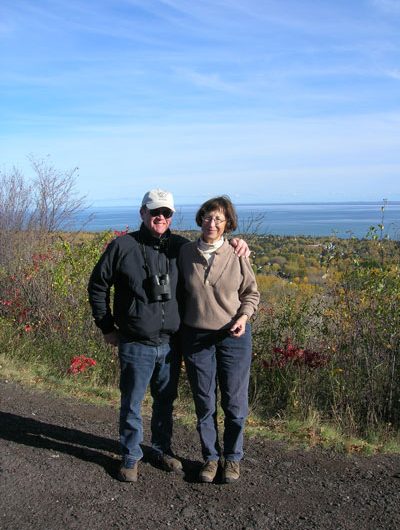 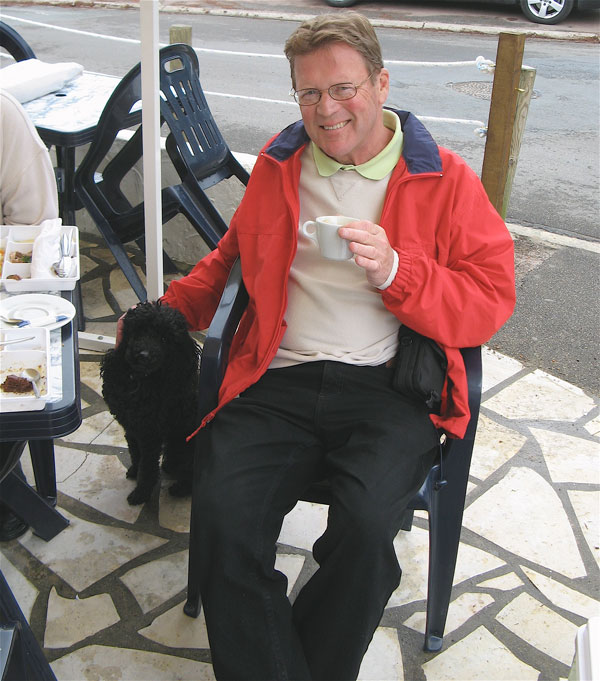 Roger Bergerson in France with a French poodle that just happened to show up, during a nature trip to southwest France several years ago. Photo provided by Val Cunningham

Roger Bergerson, who wrote for the Bugle for 10 years, died of cancer on Aug. 15.

Roger loved his hometown. A longtime resident of the Saintly City, he knew that our past includes a fair number of sinners as well as saints, and he wrote about them all.

Roger’s column on local history, “History: One darn thing after another,” was the first thing many Bugle readers turned to, and the reception met by the book of the same name that he published — a collection of his columns from 2009 to 2017 — showed that his stories deserve a life beyond the newspaper.

Roger’s own life, in his last years, was closely tied to the Bugle. Over a long career, he wrote, and wrote well, for many publications, but he was especially proud of the work he did for his community paper.

Even after cancer had robbed Roger of many things, he was still able to write. He often said that he was lucky to have the Bugle. We were also lucky to have him.

Besides his history column, Roger wrote every kind of story for the Bugle, both news and feature. He was an editor’s dream: willing and able to write about anything, to meet a deadline and to require almost no editing.

A newspaper is only as good as its writers, and Roger Bergerson was one of the best. His passing leaves a hole that won’t be filled, but those of us who read him over the last decade can be thankful that he found his way to the Park Bugle.

Readers of Roger’s history column, even if they were longtime residents of this corner of the world, invariably encountered something new in his writing — either a person, place or event they hadn’t heard of, or a new tidbit about something familiar.

As it occurs, history may be “one darn thing after another.” But through the historian’s alchemy, those things acquire shape and meaning and texture.

Roger Bergerson gave shape to our local history. As he passes into the pages of history, he leaves a legacy of excellence, curiosity, persistence, humor, and grace. Roger submitted his last column, which will appear in the October Bugle, the night before he died.

Roger was born in St. Paul in 1945, graduated from Cretin High School and earned a journalism degree from the University of Minnesota. He worked as a reporter for the St. Paul Pioneer Press and held several other positions, before he and his wife, Valerie Cunningham, began working together as writers and editors for a variety of clients.

Roger and Val enjoyed many nature and birding trips, most recently a trip on the Amazon River in Peru. Roger was an avid golfer and birdwatcher. He was a man of great wit and laughter, and he will be missed by many.

davehealy
Dave Healy is a 33-year resident of St. Anthony Park and a retired college teacher and administrator (Bethel College and the U of M) and editor (The Writing Center Journal, Public Art Review, Park Bugle). He and his wife of 48 years have two married sons and three grandchildren. In 60 years as a baseball fan, he has never caught a foul ball.