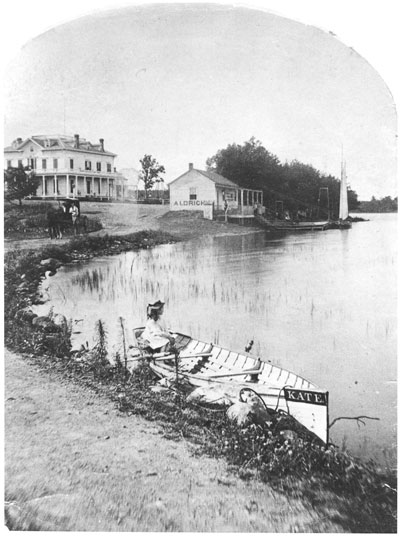 Lake Como has always been on the small side, even when it was one-third bigger than

When Lake Como was promoted as a resort destination, William B. Aldrich owned its most prominent hotel, the Aldrich Hotel, located near the site of today’s Lakeside Pavilion. It was known as the Lake Como House when it burned to the ground in 1883. (Minnesota Historical Society)

now. But it’s been providing anglers with action since the early days of Minnesota’s statehood.

Too much action, maybe. A newspaper in the 1860s noted that a couple of “sportsmen” had taken several hundred fish with hook and line from there in just three hours.

One of the species in the lake back then was the northern pike, or pickerel, as it was then known.

“Two ladies went out to Como yesterday for the purpose of getting pond lilies,” reported the St. Paul Daily Pioneer in the summer of 1869. “There happened to be in the boat a couple of trolling lines. One of the ladies, just for the fun of the thing, took up one of them and threw the hook overboard.

“It floated off not more than 20 feet before a pickerel nearly two feet in length snapped the hook. The bite was so unexpected and savage that it almost threw her overboard. She hallooed [sic] but stuck to the line and pulled him in like a little hero.”

The paper added that her friend caught a fish of similar size, and “both ladies returned to town with their game and so proud of their success that they would hardly speak to their best friends.”

It’s hard to believe now, but huge northerns were caught in Lake Como, including a 32-pound whopper landed by Col. August Knauft (or Knauff, as newspapers tended to spell it). Knauft, the proprietor of the Lake Como House, put the monster on display at a downtown hotel, probably hoping to lure anglers to his resort.

Concerns about overfishing prompted the Minnesota Legislature to establish a Fish Commission in 1874. Shortly thereafter, funding was appropriated to establish the first state-run hatchery below the bluffs of Mounds Park.

The Fish Commission was dedicated to maintaining the fish populations of the state’s rivers, lakes and streams, as well as improving on the mix of species in them, mainly to draw tourists and anglers.

The thinking at the time was that any “desirable” fish species could and should be introduced wherever possible. (Steven R. Hoffbeck offers more detail in his article “Without Careful Consideration: Why Carp Swim in Minnesota’s Waters,” Minnesota History, Summer 2001.)

The commission had its successes, but one of its earliest and most intensive efforts—to introduce various species of salmon statewide—failed utterly. It was never explained where the fish would go (Hudson Bay? The Gulf of Mexico?) to spawn.

In retrospect, one of the most peculiar choices for this stocking program was Lake Como. Five hundred salmon fry were placed there, possibly winding up as supper for the northern. Whatever the case, no fully grown salmon were ever recorded in the lake.

The struggle to keep water in Lake Como in the late 19th and early 20th centuries has been well documented elsewhere (see cpa.comopark.us/attachments/ComoHistoryWalk_extended.pdf ).

Even after the lake level was stabilized, water quality became an ongoing issue, as was dense aquatic vegetation.

Lake Como fishing has revived in recent decades, however, beginning in 1985 when the Minnesota Department of Natural Resources (DNR) removed rough fish from the lake. The DNR restocked with largemouth bass, walleye and bluegill sunfish, and an aerator was installed to minimize winter fish kills.

Currently, the stocking emphasis is on bluegills and channel catfish. A 2011 DNR study showed both species were well represented, as well as walleyes and, you guessed it, northern pike. The latter, however, come nowhere close to matching the size of their legendary predecessors.

People fish from the DNR pier on the south end of the lake, at the dock at the Lakeside Pavilion or on a level spot on the shoreline.

“Como … is a great lake for fast bluegill action,” according to a DNR publication. “All one needs is a hook, bobber and some worms or corn.”