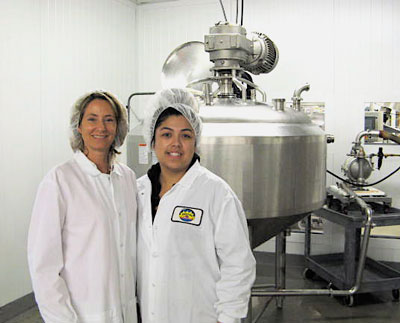 Neighbors and community groups may have wanted something other than an office-warehouse building at 650 Pelham Blvd., just north of I-94, but the new facility was just what the founder of Salsa Lisa was looking for.

Lisa Nicholson’s sauce company had outgrown its production kitchen space nearby on University Avenue and the St. Anthony Park resident wanted to stay in the area. In March, Salsa Lisa became the first tenant in the new Meridian Industrial Center.

“At our previous location, we’d added on incrementally as we grew, but here we had a chance to design our space, and the flow of our work processes is much improved,” she said. “Another advantage is that here we have four loading docks, while before we had one that we shared.”

For about a year, the Union Park and St. Anthony Park community councils succeeded in blocking the plans of Industrial Equities L.L.P. to build on the 5.2-acre tract. It had been the site of two Overnight Express warehouses until the St. Paul Port Authority demolished them to clear the parcel for development.

The St. Paul City Council sided with residents, but a Ramsey County District Court judge ruled in October 2012 that the developer could proceed. The 56,000-square-foot facility was completed in August 2013 and today it is fully leased.

Nicholson started making salsa to sell while attending the University of Minnesota in the early 1990s, founding her company in 1995.

“Our salsa appealed to them because we use fresh tomatoes, all natural ingredients and our products have a long shelf-life,” Nicholson said.

The six varieties of Salsa Lisa are refrigerated, which Nicholson says helps preserve their fresh flavor and nutritional value.

Locally, Salsa Lisa is available in most grocery stores and food co-ops, and Calavo’s clout has helped place the products with major national retailers. The salsas currently are sold in 15 states, mainly in the Midwest and Northeast, as well as California.

On the day Nicholson talked to the Park Bugle, the operation was making 1,000 gallons of salsa, some of it destined for sale at Costco. Trucks from St. Paul carry the sauces to Calavo distribution centers in California, New Jersey and Texas.

“Salsa is easy to make cheap,” said Nicholson. “It’s hard to make it really good. Consumers are very discerning, and they have responded very favorably to our full-flavored products. It tends to get personal: ‘That’s my salsa, that’s the only one I use.’”

In a few years, Calavo could exercise its option to acquire the share of the company still owned by Nicholson. In the meantime, she says the relationship she has with the parent company is a good one.

“We’re very well supported,” she said, “and they’re very good at letting us do what we know how to do.”