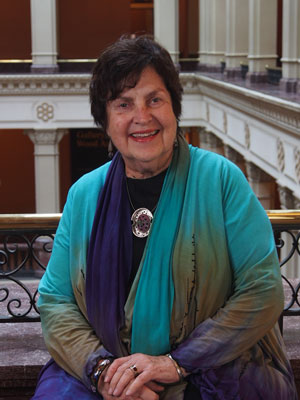 Julie Himmelstrup celebrated her 80th birthday in August, but the icing on her cake won’t come until Nov. 6, when the Pacifica String Quartet and cellist Johannes Moser play composer Julia Wolfe’s “Splendid Hopes” at the Nov. 6 Schubert Club Music in the Park Series concert.

That new piece by the Pulitzer Prize-winning composer and MacArthur Fellow is a cocommission funded in part to honor the milestone birthday of Himmelstrup, who founded the Music in the Park Series in 1979.

Many of Himmelstrup’s friends and longtime series subscribers helped achieve the commission through buying $50 shares in the project.

“What could be a better 80th birthday present,” Himmelstrup said. “What a thrill to have a new piece commissioned in your honor.”

“The idea of celebrating Julie’s 80th birthday with a piece of new music was a natural one,” said Schubert Club artistic director Barry Kempton. “Julie has encouraged guest ensembles to include new and nearly new music in their programming since she founded the series. Co-commissioning a new work by Julia Wolfe, one of the country’s leading composers and recently acknowledged as such with a Pulitzer Prize for Music, is an honor for the Schubert Club.”

Music in the Park has a long history of commissioning music, particularly work from local composers such as Carol Barnett, Libby Larsen, Randall Davidson, David Evan Thomas and the late Stephen Paulus.

“It’s something I started early,” Himmelstrup said. “We should be supporting these composers,” and selling shares for commissions allows many music lovers to get involved, she said.

“I like the idea that many people can contribute to something. You don’t have to be rich to contribute.”

The concert will be held Sunday, Nov. 6, at 4 p.m. at the St. Anthony Park United Church of Christ, 2129 Commonwealth Ave. A preconcert talk with Kempton and Himmelstrup will begin at 3 p.m. They will be reviewing some of the highlights (“and lowlights,” Himmelstrup laughed) of her many years with Music in the Park.

The Pacifica Quartet is known for its virtuosity, exuberance and often-daring repertory choices.

The group received the 2006 Avery Fisher Career Grant, was named Musical America’s “Ensemble of the Year” in 2009 and received a Grammy Award for Best Chamber Music Performance in 2009. The Pacifica performed all of the Beethoven quartets at Music in the Park Series concerts over three seasons, from 2008 to 2011.