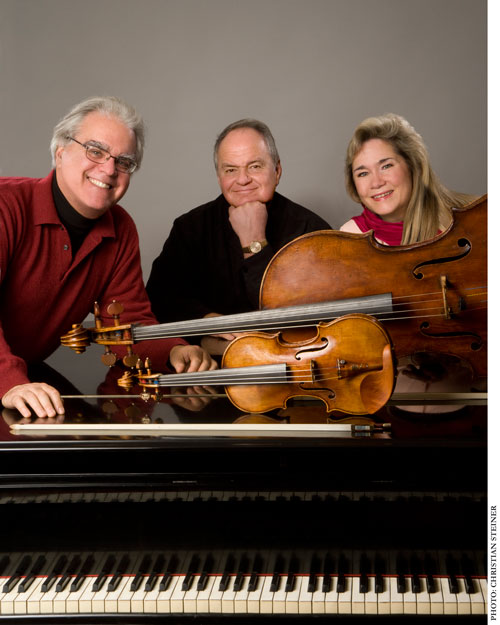 The Schubert Club’s Music in the Park Series will bring six concerts to St. Anthony Park United Church of Christ in its 2016-17 series. The church as been home to the series since 1979.

The Kalichstein-Laredo-Robinson Trio will launch the series with a concert on Sunday, Sept. 25. Pianist Joseph Kalichstein, violinist Jaime Laredo and cellist Sharon Robinson have been performing together for 40 years, making the trio one of the longest-lived ensembles with all of its original members. “The KLR players are superstars of the chamber music world,” according to the Washington Post. A favorite ensemble of the Music in the Park Series audience, listeners will learn why the Post has declared the trio “the greatest piano trio on the face of the Earth.”

The Pacifica String Quartet with cellist Johannes Moser will perform on Sunday, Nov. 6. Known for their virtuosity, exuberance and often-daring repertory choices, the Pacifica Quartet consistently plays with “clarity, perfect togetherness and the finest of tuning,” according to the London Time). With numerous awards that include the Avery Fisher Career Grant in 2006, Musical America’s “Ensemble of the Year” in 2009, and the 2009 Grammy Award for Best Chamber Music Performance, the quartet is internationally recognized as one of the foremost interpreters of string quartet cycles. The quartet and Moser will play Schubert’s beloved String Quintet and a new quintet by Pulitzer Prize-winning composer Julia Wolfe, a co-commission of the Schubert Club and three partnering presenters.

The Danish String Quartet will perform Sunday, Feb. 12. Combining a passion for Scandinavian composers—whom they frequently incorporate into adventurous contemporary programs—with highly skilled and profound performances of the classical masterpieces they so adore, the Danish String Quartet continue to solidify their sterling reputation as “one of the best quartets before the public today” (Washington Post)—all without pillaging cities or razing the English coastline.

Harpist Yolanda Kondonassis and guitarist Jason Vieaux will perform on Sunday, March 5. Hailed as “a brilliant and expressive player” (Dallas Morning News), Kondonassis is celebrated as one of the world’s premiere solo harpists. Since her debut at age 18 with the New York Philharmonic and Zubin Mehta, she has performed across the globe as a concerto soloist and in recital, bringing her unique brand of musicianship and warm artistry to an ever-increasing audience. A published author, speaker, professor of harp and environmental activist, she weaves her many passions into a vibrant, multi-faceted career. Joining her for this Music in the Park Series concert is Vieux, who in the words of NPR, is “perhaps the most precise and soulful classical guitarist of his generation.” The New York Times lauds his playing as “virtuosic, flamboyant, dashing and, sometimes ineffably lyrical.”

Violinist Alina Ibragimova and pianist Cédric Tiberghien will perform Sunday, March 26. Russian-born Alina Ibragimova seemingly defies the laws of physics, playing with an “immediacy and honesty” that collapses “any sense of distance between performer and listener” (The Guardian). Ibragimova has a long-standing partnership with pianist Cédric Tiberghien, whose flourishing international career spans five continents where he has performed at some of the world’s most prestigious halls.

The Daedalus String Quartet will play with cellist Wilhelmina Smith and actress Linda Kelsey on Sunday, April 23. Kelsey, Smith and the quartet will explore music and literary texts associated with Beethoven’s Kreutzer Sonata.
You can read more about the 2016-17 Music in the Park Series at schubert.org.

A Music in the Park Series six-concert subscription is $144. Student subscriptions are $66 (with valid I.D. and an .edu email address). Single tickets for each performance start at $29. You can buy tickets at Schubert.org.