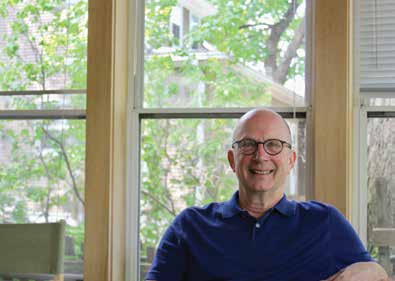 Schumacher to retire from SAP foundation

He’s often playfully referred to as the mayor of St. Anthony Park, but really, Jon Schumacher says, he’s just the guy who finds out and follows up.

As the executive director of the Saint Anthony Park Community Foundation for the last 20 years, Schumacher has been the unofficial go-to guy for all things St. Anthony Park.

If someone calls asking what time the library closes (and they have), he’s happy to look it up.

Crumbling steps at College Park? A quick text to Mike Hahm, director of St. Paul Parks and Recreation, and he’s got the schedule for the new steps and gives a little nudge to see if the project could move up the calendar.

That responsiveness is key to what Schumacher says is a fundamental part of his work at the 21-year-old foundation: building community.

Add Schumacher’s election to the St. Paul Public Schools Board of Directors in 2015; his seven years on the city’s Neighborhood Sales Tax Revitalization (STAR) board; years managing the student newspaper and spring talent show at St. Anthony Park Elementary School, serving on site councils at both Murray Middle School and Como Senior High School; and chairing and serving on the St. Anthony Park Lutheran Church council, and that “neighborhood mayor” moniker is easy to understand.

In December, Schumacher will take off “the guy hat,” as he calls it, and retire from the foundation. He’s also not seeking re-election to the school board this fall.

“It’s time,” he says. A new grandchild in Arizona, both daughters living out of state and the recent retirement of his wife, Mary Briggs, from her nursing career was the right mix to push him to step aside and “let new leaders step forward.”

Foundation board chair Lisa Sackreiter says Schumacher makes “those around him, including me, believe we have gifts that make our community better. It’s fun and often time-­consuming to meet with Jon in public places because he talks with everyone.”

The art of bringing people together is something Schumacher saw modeled early in life. He grew up in Madison, Wis., the third son of a Lutheran pastor and a mother who majored in music in college who instilled in her son “a love of the arts and understanding of the importance of being present.”

“He was a big guy and he’d put his arm around people and laugh, and there was always this joy in bringing people together from every walk of life, making them feel a part of what was important,” he said. “That was my role model.”

Schumacher moved to the Twin Cities in the mid-’70s to pursue a career in theater after college. He waited tables, took improv classes and soon joined comedian Dudley Riggs’ touring company. After a couple of years, he and a friend started their own company, writing shows and training films for corporations. He met Briggs and they married, settling in St. Anthony Park, where Schumacher’s brother Tony and family were living.

Jon’s acting and writing work continued and included voiceovers for radio and some modeling for print advertising. The flexible work blended well with family life. He was the stay-at-home dad after his daughters, Julia and Jane, were born: “Often, I’d put them in the back of the car and go to auditions, and there’d be other actors in the same situation, and you’d say, ‘Can you watch the kids while I go into the audition?’ ”

Schumacher became active in the girls’ schools and was immersed in the community when the Saint Anthony Park Community Foundation was formed in 1998. After a year of helping the foundation with its infrastructure, the organization’s first executive director, Ginger Bethe, moved on and Schumacher was hired.

“Jon showed up at the right time to bring just what the foundation needed: a great neighborhood presence,” says Kent Eklund, one of the first board members. “He brought a network with him and he continued to build that network.”

The foundation was the brainchild of the late Andy Boss, president of St. Anthony Park Bank (now Sunrise Banks) and pivotal supporter of many neighborhood institutions. Boss and the late Gerald McKay, founder of the now-defunct St. Anthony Park Association, were instrumental in doing the work to establish the foundation, Eklund says. (Another local nonprofit that Boss and McKay were instrumental in founding was the Park Bugle in 1975.)

“The foundation was established to be able to support the wide variety of nonprofits in St. Anthony Park,” Eklund says. Schumacher recalls Eklund describing to him the difference between, say, the District 12 Community Council and the foundation: “They do and we support the doing.”

Initially, the foundation had two goals: augment and fundraise to support neighborhood organizations and build an endowment to enable the foundation to continue its work, Eklund says, “and, in fact, it’s been quite successful at that.”

Looking back at all the projects he spearheaded with the foundation, Schumacher is especially proud of are the Como 2030 plan—a document designed to guide development in St. Anthony Park through 2030—and Murray’s Environmental Education (E2) program—a course aimed at helping seventh-grade general science students move into pre-Advanced Placement classes when they reach high school.

The foundation gave the funding for District 12 to hire a staff person to hold the public meetings and workshops that helped form the Como 2030 plan in 2008. Schumacher says the plan gives the community a voice in development, which includes the desire to create housing that allows aging residents to stay in the neighborhood and brings in more residents to support the retail area.

“Jon has been a leader in promoting a development framework and bridging the high expectations of the community with the economic realities,” says Rick Beeson, executive vice presi­dent at Sunrise Banks.

Schumacher’s advocacy of local businesses “has been valuable in providing promotion and marketing for our businesses,” says Terri Banaszweski, vice president of business development at Sunrise. He helped establish the December Shop Home for the Holidays and summer Park B4 Dark events in the Como and Carter avenue retail area.

When Murray science teacher Tim Chase approached him with the idea of partnering with Finland, Minn., environmental learning center Wolf Ridge to develop the E2 program, Schumacher found the donors who gave $46,000 to launch it. It’s now in its seventh year.

Schumacher also initiated the Spirit of the Park award, which honors a community leader during the annual July 4 celebration at Langford Park, and he’s been a strong advocate of Murray’s Pilot One-on-One tutoring program and Raptor Center partnership and the Creative Enterprise Zone—a coalition of creative businesses that work to promote South St. Anthony’s historic and creative character.

It’s Schumacher’s time, energy and coaching that Sackreiter sees as his real contributions to St. Anthony Park. In turn, Jon attributes that to his mentor, Andy Boss, who told him the secret to successful leadership was to “make sure you have the right people at the table and that the people whose lives are affected have a voice in it.”

When he contemplated running for school board four years ago, Schumacher’s daughter, Julia, a teacher, echoed that advice.

“She said, you just make sure that when you are talking about people’s lives and their children, that they are at the table speaking for themselves,” Schumacher says.

Finding the right people to come to the table is now the task of the foundation board, which Sackreiter admits “will need to establish an identity of its own,” with Schumacher’s retirement: “The transition is a good excuse for the board to employ new ways of listening to and engaging with the community and re-­examining how our resources, including a new executive director, can keep St. Anthony Park thriving.”