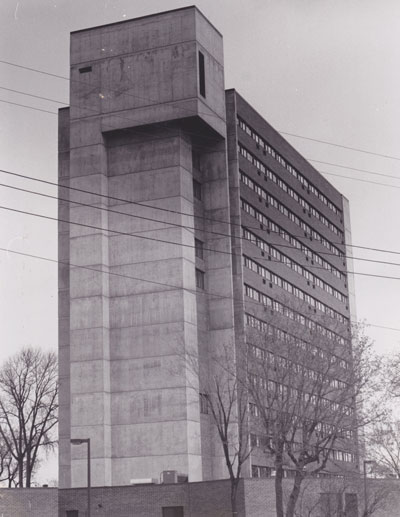 The iconic Modernist tower was built in 1976. Bugle archive photo

If you walk down Raymond Avenue in South St. Anthony, you’re sure to notice Seal Hi-Rise on the corner of Territorial Road, a gray slab of a building set back on a hill of trimmed grass, an American flag in the foreground of the concrete.

By far the tallest building in the neighborhood, it occupies the corner so quietly that it can be easy to forget it’s there. Yet for four decades, the building has been quietly doing important work, giving hundreds of people a lease on life in a good home.

Owned and operated by the St. Paul Public Housing Authority, Seal Hi-Rise is marking its 40th anniversary this year. Four decades is a long time for public housing, and Seal is still going strong.

Last of the Modernist towers

Most of St. Paul’s public housing was built in the 1970s, including all of the iconic Modernist towers that are scattered through the city. Seal was the last of these tower-style projects to be built in St. Paul; it was completed in 1976. The building was explicitly designed to be handicapped-accessible, providing homes for people with disabilities, a rare quality in a high-rise complex. Today, the building’s 144 units are home to people from all over the world.

“One of the things that the community might not realize is how diverse it is,” said Scott Simmons, a pastor and member of the St. Anthony Park Community Council. Simmons regularly offers worship services to residents of the complex.

“Seal is about 35 percent Somali Muslim, there is a small Eritrean Christian group, about 20 percent of the residents are international students or students of color, all of whom qualify for government assistance,” Simmons said. “The rest of the folks are people either with physical, emotional, mental or chemical disabilities, or several of those. They might be a half step from homelessness, and they are in a situation where this is where they can live. These are wonderful people with wonderful stories and a depth of experience and depth of wisdom about how you live with a disability, how you live with tragedy in your life.”

As Simmons explained, there are a lot of geographical advantages for Seal being located in St. Anthony Park. It’s a short walk to the new Green Line and the small businesses along Raymond Avenue. However, it isn’t always easy to get around in the industrial fringes of West Midway.

“A number of our community council leaders came to a recent event, taking interest in stories of people who live in Seal,” Simmons said. “Transportation is difficult for people who are in wheelchairs or walkers, especially in the winter; they can’t even get down easily to the light rail. And within a mile, there’s not an accessible- , affordable-food option.”

Figuring out how to help the residents of the neighborhood, who make up more than 10 percent of the St. Anthony Park census tract, is a growing concern for the district council. But the diversity of the people who live in the building can make the goal of providing affordable food to the residents difficult to accomplish.

“We’re just really trying to integrate that group in the community,” said Cailin Rogers, outreach and operations coordinator for the St. Anthony Park Community Council. “There are a lot of non-English speakers, a lot of immigrants. You’ve got lots of people who have lived here for a lot of years and don’t feel engaged, and we need to help them feel at home.”

These days, Rogers and Simmons have been working together to focus on getting affordable food into residents’ hands. When Simmons moved Lydia’s Place, a church-based co-working space, into St. Anthony Park a few years ago, one of the first things he learned was the need for food access. And today, he is working to connect Seal residents with area gardeners.

“We now have two community garden plots, plus what remains of my vegetable plot,” Simmons said in an interview in late September. “Late Sunday morning, we pick and harvest the fresh veggies. A couple of folks from Seal come and pick them up, we worship at 1 [p.m.], and after worship we assemble everything on a table. And people in the community come and get fresh vegetables. It’s the seventh week of doing this and that’s really exciting.”

For people on fixed incomes, like the residents of Seal Hi-Rise, the “food desert” phenomenon can be a barrier. Even with Hampden Park Co-op nearby, getting affordable food is still a challenge for many in the tower. This summer, Rogers and the community council hired an intern from the University of Minnesota’s Center for Urban and Regional Affairs to study the “food desert” problem using maps and surveys.

“We hired an intern from CURA (the Center for Urban and Regional Affairs at the University of Minnesota), to study effects of the St. Anthony Park food desert on local low-income residents,” Rogers said. “She spent the summer building connections at Seal High Rise and at Hampden Square Apartments just a block away to find out what impact not having a local grocery store has on people’s ability to access food.”

Figuring out how to incorporate Seal residents into the neighborhood politics involves a lot of outreach work, something that not every Twin Cities’ neighborhood group takes the time to engage with. As Rogers explains, Seal residents have been “pretty historically underrepresented at the council,” and her new strategies include having more events there, and doing more explicit outreach beyond traditional meetings.

That Seal should be thriving after 40 years is a testament to the resilience and creativity of the city’s Housing Authority, particularly given the tight purse strings from the federal government.

“Keeping aging hi-rises in good shape takes good maintenance, plus good planning and adequate funding,” said Al Hester, the housing policy director for the St. Paul Public Housing Agency (PHA). “Congress and HUD (the Department of Housing and Urban Affairs) are not providing enough capital funding to even keep up with new capital-improvement needs year to year. The PHA has about $100 million in backlog capital needs, including almost $50 million for replacing hi-rise plumbing systems. The Minnesota Legislature has provided some much-needed funding to preserve public housing in the state, and much more is still needed.”

In other parts of the country, ’60s and ’70s-era public housing buildings have been mothballed or torn down. But in St. Anthony Park, the Seal High rise is thriving.