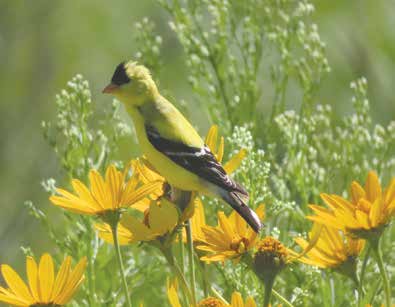 Seeing one bird at a time

When I first began bird watching more than 30 years ago, I often walked the three or four blocks to Walsh Pond where Lauderdale borders the Midland Hills Golf Course.

I carried a small spiral notebook and wrote down every bird species I saw with notes on any I couldn’t identify so I could look them up later. I’d sit by the pond and see what showed up.

Even though I listed every bird I saw, I wasn’t as obsessed as Richard Koeppel, whose son, Dan, wrote “To See Every Bird on Earth,” about his father. I confess I kind of wanted to see every bird in Minnesota, but not every one on earth.

Instead, I began rather fanatically trying to identify every bird I saw. I’d be disappointed if I couldn’t find the bird in my field guide.

I got a copy of Bernie Fashingbauer’s “Bird Watcher’s Life List and Diary” and entered each of my first-time sightings in that book. It has space for the date, locality, habitat and notes. It helps to bring the memory back to life.

I began to take an international trip with two or three buddies about once a year beginning in 1995. The first trip was to Churchill, Manitoba, in Canada. Then a maritime trip to Nova Scotia, followed by a boat trip to the Dry Tortugas, off the end of the Florida Keys. These were all trips to North American locations, so I added them to my North American life list.

But then we began taking trips to Central and South America. The birds on these trips were a real challenge.

There were lots of similar looking birds, all in the same category. Take woodcreepers, for example. There are some 15 woodcreepers in the field guide for Costa Rica, and they all look very similar. I hadn’t done any real in-depth studying before the trip, so I had to rely on the trip leader or one of the more studious birders to identify which specific woodcreeper we were seeing.

I began to feel like I was just a checklist ticker, not really seeing and identifying the bird for myself. And I wasn’t learning about most of the birds. I was just checking them off a list. It was frustrating.

Fast forward to my retirement in 2005. One of the people I worked with gave me a lined journal and I decided to title it “The Birds of Retirement.” I kept it beside me at the kitchen table and recorded the birds I saw out the front windows. We’ve got six or seven feeders in the yard or hanging from the roof overhang.

I’m on Volume XVI of “The Birds of Retirement.” I’ve cajoled myself into believing that someday, when I’ve departed this mortal coil, my executor will go through these volumes and distill them into multiple scientific treatises that reveal no end of unique facts and arcane secrets about even the most common yard birds.

I approached my daughter Bethany on the subject a few weeks ago and she assured me that she’d go through each volume religiously! There was a bit of eye rolling involved in her commitment.

Suffice it to say, after all of my years of birding, I’ve found that I’m no longer driven to complete a list, to tick off every bird. I’ve moved on to looking at a single bird and trying to figure out what it’s up to.

This time of the year I’m getting lots of juveniles coming to check out the feeders. They sit in the shrubs and beg their parents to bring them some food. I watch them as another bird approaches, and they crane their necks to follow the new arrival to the branch where it lands.

What are they thinking? What are they learning? Are they watching out for the Cooper’s hawk? We have a Cooper’s nest in our neighborhood. They eat other birds!

I saw a goldfinch perched on a feeder peg with a chickadee hanging upside down right underneath it! What would happen if the chickadee decided to take a few pecks at the goldfinch’s toes?

The other day a house wren came up to one of the feeders. That seemed unusual to me. The wren’s bill is short and narrow, needle-like, not much of a seed cracker. They usually go for insects and caterpillars.

The wren picked a seed out of the feeder port, held it just a second, and then dropped it. “Ah,” I thought, “Couldn’t crack it, eh?”

I think I enjoy birdwatching more when I take the time to study a particular bird and wonder, “What do you suppose that one’s doing, and why?”