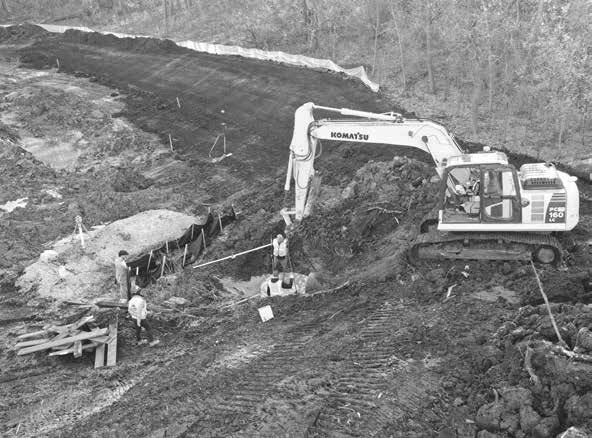 A joint governmental project to minimize potential flooding at Seminary Pond and runoff water pollution into the Mississippi River is nearly completed.

The Capitol Region Watershed District said that in a recent news release on the project it has coordinated with Lauderdale, Falcon Heights, Ramsey County and the University of Minnesota. The project is designed to minimize flooding and prevent an estimated two and a half tons of sediment and some 10 pounds of phosphorous annually from entering the Mississippi River.

Besides improved water quality, the $400,000 project is expected to improve wildlife habitat by controlling invasive plants and replacing them with native plants in and around the pond, according to a Watershed District official.

“The improvements being made to Seminary Pond will enhance its storm water management functions and the surrounding natural area that is part of the larger, 7-acre Breck Woods, enjoyed by many local residents.” Anna Eleria, Capitol Region Watershed District Division manager, said in the news release.

The improvement project involved removing 25 years of built up sediment and expanding the pond’s capacity by deepening it and raising a berm along its western edge, the Watershed District said. Rocks have been used to stabilize the channel, slopes and ravine leading to the pond. Iron-enhanced sand filters were added to the northern and southern edges of the pond to remove dissolved phosphorous, a pollutant in storm water runoff that fuels algae growth.

Eleria told the Bugle the project went smoothly “as a drier and slightly warmer fall was favorable for construction.” The project is scheduled to conclude with native plantings this spring.

Seminary Pond, located southeast of the intersection of Carl Street and Idaho Avenue, is a regional storm water pond receiving runoff from 128 acres of land in Lauderdale, Falcon Heights and St. Paul. The pond was created in 1994 and was originally designed to move and temporarily store storm water runoff. It has provided limited treatment of polluted water before it flows into the storm sewer system and the Mississippi River, the Watershed District said.

“Capitol Region Watershed District worked doggedly to pull together the partners and financial resources needed to accomplish this project,” Lauderdale City Administrator Heather Butkowski said. “The beneficiaries are the Mississippi River and all of us who are committed to doing our part to protect and improve our local natural environment.”

To learn more about the project go to capitolregionwd.org