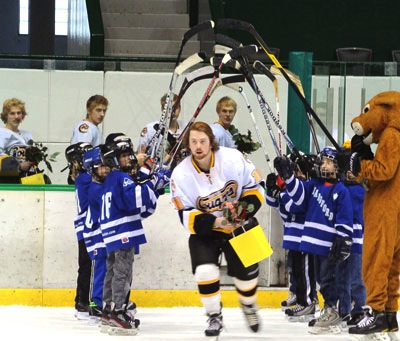 Como Park High School senior Erik Wagner skates through a tunnel of hockey sticks held by Langford Hockey Mites and the high school’s cougar mascot on Feb. 16 as his fellow senior players wait their turn. It was senior night for the school’s hockey team and the 11 team members—most of whom began their hockey careers on the rinks at Langford Park and North Dale rec centers—set to graduate in June were honored, along with their parents, before the final city conference game against the Johnson Governors. Como took the first period with a power-play goal scored by junior Tor Will. Despite senior goaltender Ernie Mantell’s 26 saves in the game, the Cougars lost, 4-1.