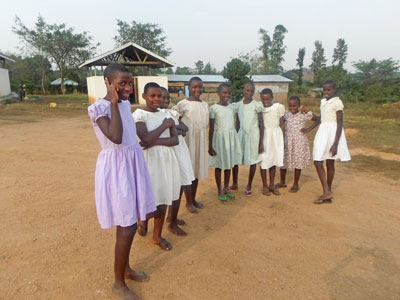 Some of the girls currently living at the Blue House orphanage in Kazo, Uganda. Photo by Karen Lilley

Hope Multipurpose Inc. (HMI) will hold an African Dinner Gala to commemorate Beatrice Garubanda’s legacy on the 10th anniversary of her death and to benefit the girls who live at the Blue House orphanage in Kazo, Uganda, which Garubanda helped found and HMI sponsors.

The gala will be held from Saturday, Sept. 19, from 6 to 9 p.m. at the North Star Ballroom in the University of Minnesota St. Paul Campus Student Center, 2017 Buford Ave., and will feature an African market, music, dinner and an auction.

Garubanda, her husband, James, and their young children moved to St. Paul from their native Uganda in 1987 so James could attend the University of Minnesota. Garubanda, who was a teacher and childcare worker, also continued her education at Luther Seminary. She was an active member of St. Matthew’s Episcopal Church in St. Anthony Park.

In 2001, Garubanda returned to Uganda and visited Kazo, where the number of children whose immediate family members had been killed by the HIV/AIDS pandemic stunned her. It is estimated that 2.2 million children have lost one or both parents in Uganda to AIDS.

In Kazo, Garubanda saw caregivers in charge of 20 or more children or children who headed households, and she became particularly concerned about the fate of the orphaned girls. Without adequate nutrition, shelter, clothing, healthcare and education—much less, caring adults—the girls faced a dire future. Garubanda wanted to establish a home for girls to give them a safe childhood and help them learn life skills, attend school and, later, contribute to their society.

Upon returning to St. Paul, she promoted her idea and acquired enough funds to purchase living quarters for the girls. In 2004, she established HMI, a nonprofit in St. Paul and a nongovernmental organization (NGO) in Uganda to operate the home. Initially, the residence housed about a dozen girls and one housemother. It was named the Blue House because for Garubanda, blue was the color of hope.

Just a year after the organization was established, Garubanda died at age 49 of a heart attack.

Early-bird tickets for the African Dinner Gala are $45 and must be purchased by Aug. 29. The cost is $55 after that date. The deadline for buying tickets is Sept. 8. You can order online or mail in a check. HMI is also looking for donations for the auction.