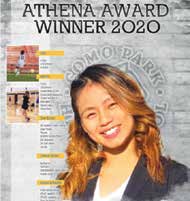 Shar Too was born and raised in the Tham Hin Refugee Camp in Thailand before moving halfway around the world to St. Paul when she was 6 years old.

Twelve years later, Shar Too is a shining star at Como Park High School who is being honored for her soccer, badminton and academic achievements and is preparing to be a first-generation college student.

Shar Too’s family and countless Karen people had fled persecution from the Burmese military in Myanmar. The journey from camps in Thailand to seeking opportunity in St. Paul has presented challenges for Shar Too and 17,000 Karen (mnkaren.org) along with success.

She has maximized her gifts and talents to succeed at elite levels.

Another special honor was bestowed upon Shar Too when she was chosen as one of just six female finalists for the St. Paul Downtown Lions Club 2020 Athlete of the Year. The club selects its honorees from all the high schools in Ramsey, Dakota and Washington counties.

Being an unselfish and humble person who doesn’t seek attention, Shar Too has downplayed the new awards and many other honors compiled along the way.

While the Athena and Lions Club banquets are unlikely to happen due to Coronavirus concerns, Shar Too has been honored at state-level banquets several times before.

She has been a fixture at the state soccer banquet as a member of the Minnesota All-State team since her freshman year. Through four seasons as an All-State player, Shar Too tallied a St. Paul City Conference record of 73 goals and 43 assists.

Kyle Johnson was Shar Too’s coach for her first three seasons of Como soccer. Johnson admires the skills Shar Too developed on her own, within her community and through school. She had no access to pay-for-play club soccer but started turning heads with her goal scoring and Como’s team improvement.

“My favorite moment came during her junior year,” Johnson said. “As the coach, I scheduled a much tougher schedule and knew the previous two years of her being ranked seventh in the state with 20 goals and second in the state with 25 goals was going to be difficult.

“She was a known player at that point and defenses looked to stop her. She did what any leader would do and put her team first, recording 20 assists, which was fourth in the entire state that year.”

Shar Too’s ability to quickly distribute the ball while defenses converged upon her, in order to create scoring opportunities for teammates, revealed the adaptability of an intelligent player.

That same selfless style of play during her senior year last fall brought the Como girls their first city conference championship since 2005.

“Shar Too plays for things bigger than herself,” Mohamed said. “She plays for her teammates and the community. I was lucky to coach her. Despite breaking many records, she thinks she still hasn’t done enough and is willing to learn to be better each day.”

After stepping down from coaching at Como, Johnson created the KFA with a mission to unite the Karen community around its passion for soccer and promote gender equity. The KFA provides young women and men opportunities to not only showcase how well they play the game, but to also influence youth, other teams and organizations to embrace an equal playing field in society.

To that end, the sweeping KFA programming includes national teams. Shar Too was selected to the national women’s team. She looks forward to playing, as well as giving back to her community through local events and trainings while she studies at Bethel University.

Beyond soccer, Shar Too had a stellar badminton career for Como. She was the varsity’s rookie of the year as a freshman. She was a key doubles player who helped the Cougars earn third place in both the 2017 and 2018 state team tournaments.

Along with partner Maria Aye Meh, Shar Too added a third-place medal for the state doubles tournament as a sophomore.

“Shar Too is a very calm and collected player with remarkable talent,” badminton coach Michelle Diaz said. “She was dedicated and worked tirelessly on various footwork and hitting techniques at each practice.”

While a young Karen girl in Thailand never expected to be a leader among peers across an ocean, Shar Too is grateful for what she’s been able to do at Como.

“I like how there are so many programs to join (at Como). I appreciate every teacher that I had,” Shar Too said.

“Sports have helped me keep moving. At some points, it was heavy for me and I felt like doing nothing. But I was motivated to stay in shape and I enjoy being competitive. I enjoy the team bonding. We’re like family. My teammates and coaches inspire and motivate me.”

Asked what advice she would give young people to help them reach their goals and dreams, Shar Too said, “Put school first.

“And keep doing what you’re good at because you never know where you’ll end up. Sometimes you end up deserving more than you think.”