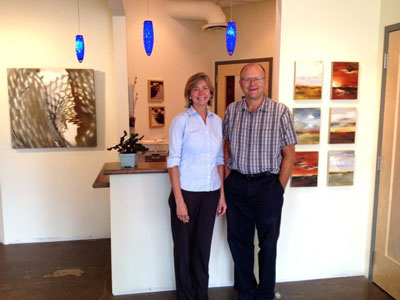 Like his father and uncle before him, he maintained a chiropractic practice in the Snelling Hamline neighborhood of St. Paul, but in recent years he dreamed of working closer to his St. Anthony Park home.

The Associated Bank building at Snelling and Selby avenues where he rented space has been torn down to make way for a Whole Foods store and apartments, so Skon Chiropractic moved to 856 Raymond Ave., south of Hampden Park.

The landscape architect who previously occupied the quarters had displayed art, which made the space especially appealing to Skon and his wife, Suzanne. In addition to being the office manager, Suzanne Skon is an artist herself.

“We tried to retain the gallery feeling by having Suzanne’s work throughout,” Bill Skon said, “which I think makes it nice for both us and our patients. It seems appropriate since the area is regarded as a creative zone.”

Skon Chiropractic can help with injuries or pain arising from a variety of conditions.

In addition, Skon said, most people can benefit from having a chiropractic adjustment every so often. He takes a holistic approach, emphasizing the importance of exercise and nutrition to overall health and well-being.

“We’re pretty low key,” he added. “We meet people where they’re at, giving them the care they need, whether that’s for relief of their symptoms or to help maintain a healthy lifestyle.”

To learn more about Skon Chiropractic, go to www.skonchiro.com.