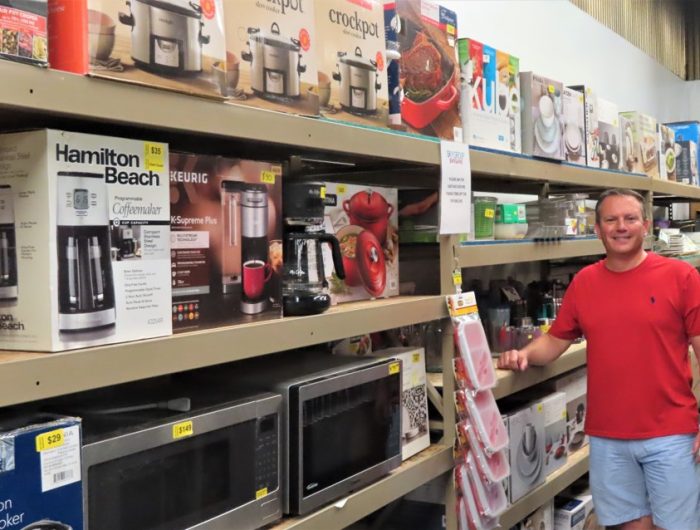 Inside a nondescript 70,000-square-foot warehouse just west of Highway 280 in the St. Anthony Park neighborhood lies Sky Group Inc.’s network of businesses that specialize in buying and selling closeout and liquidation merchandise, including life’s daily necessities.

Like many businesses, Sky Group Bargains suffered during the COVID-19 pandemic.

“It was bad, but we got through it,” co-founder Tim Keehn said. “It wasn’t like friends in the restaurant and entertainment business. They couldn’t do anything.

“People weren’t buying on the wholesale end, but retail was good—the necessities. People would say, ‘I haven’t worked for two months, but I still need to brush my teeth and go to the bathroom.’”

The parent company—primarily a wholesale operation buying from the likes of Costco, Best Buy and other retailers, distributors and manufacturers—was started 25 years ago by Minneapolis native Matt McConville and Keehn, who grew up in Rochester.

In its infancy, the company operated out of the basement of McConville’s south Minneapolis home and after several relocations moved into the warehouse at 2565 Kasota Ave. five years ago. Its retail outlet store, Sky Group Bargains, opened there about 1½ years ago and employs 15 workers on average.

Interestingly, the Kasota Avenue warehouse is owned by the Golden Valley-based Animal Humane Society, and Sky Group Bargains donates a portion of its sales to the organization, Keehn said.

Keehn is seeking another “universal” community organization, such as a school, in the St. Anthony Park area to help. If interested, contact him at 612-802-9559.

Before venturing off on their own 25 years ago, the two men worked together—Keehn as a buyer and McConville in sales—at Irwin Jacobs’ Jacobs Trading.

“Typically, we sell general merchandise: things you would find at Target, Best Buy—the big box stores—and Walgreens or CVS,” said Keehn, 51, who has a degree in business management and communications from St. Cloud State University. “The best sellers are the necessities—food and sundries such as cleaning supplies, what everyone uses every day.

“We’re the only ones in town that are cheaper than Costco, Target or Walmart,” Keehn asserted.

“We have a processing area in the back of the warehouse where we test the goods, so what is in the store ‘should’ work,” he said. “What doesn’t work we sell wholesale to people who can fix it, or we recycle it.

“We don’t throw anything away—including the tarps,” Keehn said, alluding to Sky Group’s BillboardTarps.com, which buys and repurposes the new and used material (often vinyl) used on highway billboards. “If we can’t sell it, we donate it.”

Cigale Ahlquist is a Twin Cities freelance writer and a regular contribu­tor to the Bugle.