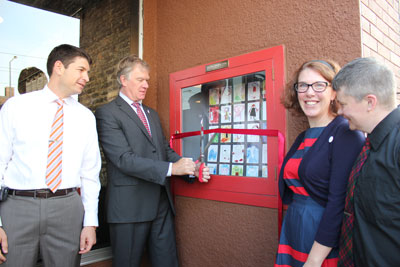 Despite the early morning hour—8 a.m.—WORKHORSE COFFEE BAR 2399 W. University Ave. had a full house on June 17 for the mayoral ribbon cutting of its Smallest Museum in St. Paul.

In his opening remarks, St. Paul Mayor Chris Coleman said the diminutive museum housed in a 2-by-3-fooot former fire hose cabinet just outside the establishment’s doors adds to the list of things that make St. Paul a great city.

What makes a city interesting is the “surprises” one finds when turning a corner on a city street, Coleman said.

WORKHORSE proprietors Shannon Forney and Ty Barnett were awarded a $5,000 grant from the John S. and James L. Knight Foundation as part of the St. Paul Arts Challenge, to create and curate a micro-museum outside the shop door. They issued a call for proposals for artists, historians and makers to suggest their best curatorial idea.

There were three criteria for proposals: relate to local, engage the audience and not “too fussy” (no items of high value). A panel of local arts leaders and community members reviewed all proposals and chose the top 12, who will each create a month-long exhibit over the next year.

The Current exhibit is the “Witch’s Hat Tower Tribute” which features art by students at Galtier Elementary School in St. Paul and curated by Sophie Durbin.

The list of upcoming shows through next June include: