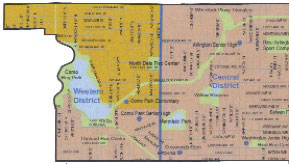 What does it take to change a neighborhood?

Community council members in St. Paul’s Planning Districts 6 and 10 will find out in the coming months if the City Council approves a Jan. 24 recommendation from the city’s Department of Planning and Economic Development (PED) to allow the South Como neighborhood to secede from District 6 and move into District 10.

South Como is the pink area west of Dale Street (the blue line) and south of Como Lake.

If the boundary change is given a green light, the two planning councils will hold public meetings in regard to the changes and begin the tasks of rewriting bylaws and district 10-year plans, adjusting board sizes and budgets, and more.

The PED’s recommendation came just two weeks after hosting a meeting on Jan. 9 at the Como Lakeside Pavilion, where nearly 170 people filled the second floor to discuss moving the 3,537 South Como residents who live on the southern and western borders of Como Regional Park into District 10.

Most of the participants— 123—were South Como residents, many of whom were there to champion the boundary change so they could have a voice closer to home about parking, traffic and other issues that come with living next to Como Regional Park. The meeting included a map-dot exercise where participants were asked to indicate where they lived and their position on the boundary change. Ninety-six percent of the 123 South Como residents who participated were in favor of the change. Of the 16 participants who didn’t live inSouth Como, 10 voted in favor of keeping the districts as they stand.

Initially, both the District 6 and 10 councils took stands against the changes. In a letter to Ward 5 councilmember Amy Brendmoen in November, the Como Community Council, which represents District 10, wrote, “The current boundaries offer a broader and more diverse perspective, allowing residents from across District 10 and District 6 to influence decisions affecting Como Regional Park.” Changing the boundaries would cause District 10 to “become a venue primarily for those concerned by the park. Residents, for whom the park is not a sole issue, will be further marginalized,” the letter said.

Both councils reversed their opinions after the Jan. 9 meeting. District 10 passed a resolution on Jan. 15 expressing its “amenability to the change” but asked that the city give the district until January 2014 to implement the changes.

Brendmoen, who lives in South Como, said she heard many constituents’ concerns on the matter as she campaigned for her council seat in fall 2011. She asked the PED to research the issue when she came into office a year ago. Park issues are not the only concerns of South Como residents. Brendmoen’scampaign literature addressed a 2011 change in the Multiple Listing Service (MLS) used by realtors that moved South Como homes out of “Como” and into the “North End” designation.

District 10, with a population of about 11,000 and an annual budget of $55,000, will gain residents but no funding because its population will not increase above the city’s minimum funding threshold.

At the Jan. 15 Como Community Council meeting, members expressed frustration at how the issue was handled. Ted Blank, council treasurer, said he was concerned about the “disregard to community councils.” One of Brendmoen’s staff members at the Jan. 9 meeting said the City Council would ultimately make the decision about the change, but Blank explained that boundary changes can’t happen without bylaw changes that would have to be submitted to the IRS and a series of public meetings hosted by the community councils. The city’s 17 district councils are independent nonprofit tax-exempt 501-c-3 organizations that receive funding from the city as well as from other sources such as private donations and foundation and corporate grants.

The process has been “clunky and painful at times,” Brendmoen conceded.
However, “there is no established route,” to changing district boundaries in the city, she said. The PED’s recommendation confirmed that there is no formal process for these changes and recommended a moratorium until city staff can develop a “process template.”
The PED also recommended that should the City Council approve the recommendation that the effective date be Jan. 1, 2014.

At press time, it was not clear when the recommendation would go before the City Council.