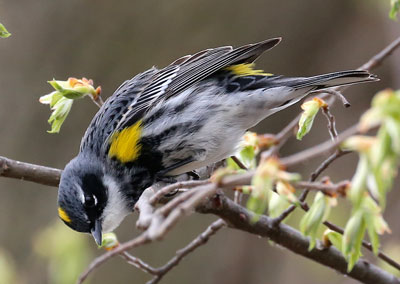 The yellow-rumped warbler is one of the first signs of spring in Minnesota. Photo by Harris Mallory

I’m hoping this column hits the streets at about the same time as its subject, the yellow-rumped warbler. Warblers in general are quite small, four to six inches in length, colorful and melodious. They’re the birds that most northern bird watchers long to see each spring.

As warblers migrate through, one of their favorite foods is caterpillars. So when I see inchworms hanging down from my neighbor’s oak tree, I tune my senses to look and listen for warblers.

There are nearly 30 species of warblers on the Minnesota Ornithologists’ Union’s checklist. Several of the species nest here in the metro area, but most breed in northern Minnesota and on up into Canada. We see them in passing, on their spring and fall migrations.

Identifying warblers in the spring requires gathering and assimilating several views, trying to get a good look at the head, wing, body and tail, then putting it all together into a composite, a memory you can take to the field guide in an attempt to put a name to the flitty critter. The birds are busy gleaning food, checking spider webs, leaf clusters, grooves in the bark, so you’ve got to follow them on their forays and try to get a look at as many different parts as you can.

The male yellow-rumped warbler is predominantly blue-gray with a yellow patch on the top of his head, on his shoulders and, of course, on his rump, which is especially visible in flight. It’s that yellow rump that has given the bird its nickname “Butter Butt.” Besides the yellow parts, it has a black mask, white throat and a dark black patch on its chest shaped like an inverted U.

The female yellow-rumped is more brownish with duller yellow patches.

I’m focusing on the yellow-rumped warbler because it’s one of the earliest spring migrants to these parts and usually among the most abundant. It’s a gregarious bird and often migrates and forages in flocks. The birds keep in touch with each other with a contact call: “check.” Listen for that in early spring. Its song is a weak, indistinct warble or trill that often just fades out.

Like many other warblers, yellow-rumped warblers do some fly catching, darting out to catch an insect. They even chase insects over water, often right near the shoreline.

But even if it’s too cool for bugs to be flying, yellow-rumped warblers have an adaptation that allows them to turn to a different food source. Look for these early migrants feeding in the street or on the sidewalk—not on inchworms but on the scales of tree buds that have been knocked down after a storm. That gives us a chance to take a good look at this attractive warbler.

Yellow-rumped warblers have the ability to feed on vegetative matter. It’s unusual for an insectivore to be able to digest plant material. The yellow-rumped warbler’s digestive tract does a retrograde reflux that moves its food from the intestines back up into the gizzard for further processing, and can do so several times if necessary.

And there’s a higher concentration of bile in the gallbladder and intestine and a slower gastrointestinal process that enables the bird to get nutrition out of the waxy lipids contained in such berries as those of the bayberry, juniper, poison ivy and wax myrtle.

In fact, before its name was changed, the yellow-rumped warbler was known as the myrtle warbler.

Perhaps it’s this ability to eat berries and seeds that allows it to be such an early migrant, even before any flying insects or inchworms have come out. But it also migrates early because it has a long way to go.

The yellow-rumped warbler breeds all across Canada and the extreme northern United States from Minnesota east to the Atlantic coast. It’s the most abundant wood warbler in Canada.

There are several places to look for warblers in Ramsey County. My buddy Val and I led a walk around Lake Como early one May morning and found a tree that had so many different warblers, it was a tutorial for spring warbler identification.

Another good place to hit in the spring is the Woodview Open Space at Larpenteur Avenue and Mackubin Street, especially in the dog park area near the lake. But remember, dogs have priority in this area; observe from outside the fence if pups are playing.

The yellow-rumped is one of the last warblers to leave in the fall. It heads to southern climes, even as far south as Panama. Once again, in the fall, it can survive on waxy berries after the frost has killed off all the flying and crawling insects. What a nice adaptation, this retrograde reflux.

Maybe you’ll get a chance to identify one of these Butter Butts this spring.

Clay Christensen lives and writes in Lauderdale, Minn. His book, The Birdman of Lauderdale, is available in local book and bird stores and at www.BirdmanBook.com.