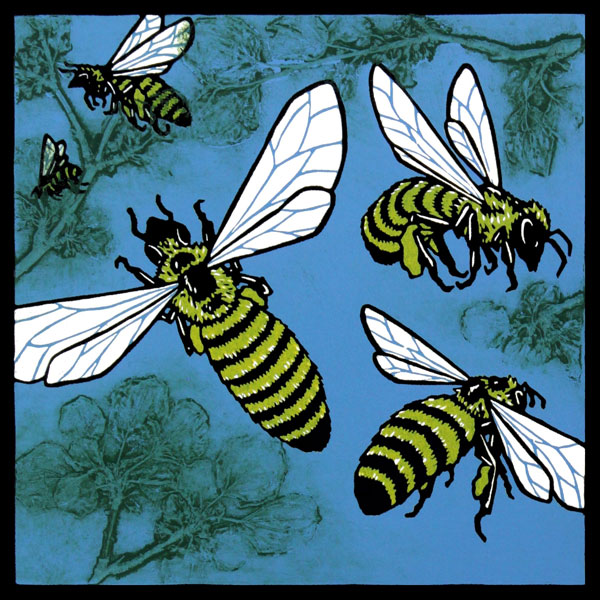 The 47th annual St. Anthony Park Arts Festival will be held Saturday, June 4, 10 a.m. to 5 p.m. The event will include 75 artists, music, food and a kids activity tent sponsored by the Saint Anthony Park Community Foundation.

You can find a map of the festival, the music schedule and more here.

And if you’d like to meet this  year’s “featured artists” at the festival, read on.

Emily Gray Koehler spent 2015 traversing Minnesota’s natural world in search of trespassers, her word for non-native invasive plants that have found their way into the state’s forests, fields and waterways.

These interlopers—garlic mustard, Queen Anne’s lace, Amur silver grass and more—will change the state’s landscape if humans don’t act to curb their invasion, Koehler said. Her new series, “The Trespasser’s Garden,” combines the block colors of reduction woodcut prints with the “ethereal nature” of collagraphs made from the plants the printmaker gathered as she explored the ecological and environmental impacts of invasive plants on delicate ecosystems in Minnesota.

The Fruits of Our Labor by Emily Gray Koehler

One of the St. Anthony Park Arts Festival’s three featured artists this year, Koehler will showcase work from the project on June 4. She received a 2015 Artist Initiative Grant from the Minnesota State Arts Board for “The Trespasser’s Garden,” which she hopes will evoke conversations, something she wants to happen when people come into her art-fair booth or her studio. “Whether people want to buy a piece and hang it on their wall or they hate it, I want people to engage with it and think a little deeper,” she said.

In the print Now They Are But Ghosts, Koehler combines a color-reduction woodcut of a beaver, a Blanding’s turtle and the water bird king rail with a collagraph of purple loosestrife, a beautiful but invasive plant that pushes out beneficial plant species and reduces breeding, nesting and foraging habitat for endangered vertebrates, such as the animals in the print.

In A Story of Sun and Shadow, Koehler depicts how the invasive reed canary grass is slowly shading out the seedlings of the cottonwood trees, once abundant along Minnesota’s riverbanks.

Koehler’s early work explored the landscape of her childhood, which she spent growing up in a home nestled in the forest of northern lower Michigan and on her family’s ancestral fruit farm, where she was introduced to the idea that humans shape nature, she said.

Her work has evolved to focus on how human actions such as forest succession, the movement of plant and animal ranges, and the introduction of exotic species have affected the natural processes and habitats of plants and animals.

“When I was little, I imagined this forest where I grew up was wild and untouched,” she said. “In retrospect, I realize not only was it certainly touched by humans, but it was designed so people could live in it with cleared areas, paths, trails.”

Koehler now lives in White Bear Lake and works out of her studio and gallery, located at 2168 Third St. in downtown White Bear Lake. You can find Koehler at booth no. 10 at the arts festival Saturday, June 4. —Kristal Leebrick

After four decades of working in leather, Ann Ringness still hand-cuts and sews everything she makes.

A longtime exhibitor at the American Craft Council’s spring show in St. Paul, Ringness creates leather bags that she crafts herself, a practice that’s unique to many leather artists, who hire sewers to help in the construction of their work, she said.

“I don’t like to give up control,” she laughed.

Ringness fell into leatherwork in the 1970s. She had just moved back to St. Cloud, her hometown, from Los Angeles, where she had been working with her then-husband, who was a printmaker working with lithographs.

“The real story is I like working with my hands,” she said. She had always worked in the arts, but in 1974 she needed work.

A detail from one of Ringness’s bags

“I got a job in a leather shop. At that time, they were hiring anybody off the streets,” she said. “It was the hippie era.”

She describes herself as a “Type A person and a hard worker” who found herself working for a business that was having trouble paying her for her labor. She eventually started her own business, “which I called ‘Leatherworks,’ thinking that was a really creative name.”

Ringness went into partnership with a friend and opened a shop. On the side, she did alterations for Berman Buckskin, where she learned to construct bags.

Eventually, she began working on her own out of her home and exhibiting at craft shows in Minnesota and neighboring states.

“I’ve done everything, different custom work, repair,” she said. “Now I just prefer to do my own work and my own bags. I just want to do what I want to do.”

She described her work as conservative and functional, but said she works “out of the box” with surface design. She burns images into the leather to create a positive-negative effect. Her designs include hands, letters and abstract images. And she is adding embellishments such as crimped metal, buttons and handmade silver pieces. She is also moving into creating bags with upholstery fabric, which has enabled her to make larger tote-size bags.

“Function is my big thing,” she said, and that’s what sells in Minnesota.

Like most artists, Ringness doesn’t work a regular 9-to-5 schedule. “I work all the time,” she said. “I work right here in my house,” and if she finds a good movie on Netflix to watch while she’s creating, she will work late into the night.

You’ll find Ringness in booth no. 33 during the June 4 festival. —Kristal Leebrick

An example of Chuck Solberg’s work at Crocker Art
Museum

There’s an entire wall of prize ribbons in potter Chuck Solberg’s tidy studio on University Avenue. It’s a testament to his artistic skill and accomplishment in mingled shades of blue, red, gold and green. It’s also a mildly jarring note of bright coloration in a work space otherwise devoted to the subtle natural tones of wood-fired clay.

South St. Anthony Park resident Solberg, whose work can be found in permanent museum collections from the Weisman in Minneapolis to Japan, says, “I feel that clay should look like clay. There’s no better marriage than wood fire and clay.”

Press Solberg on the vital elements of his work and he’ll talk about rhythm, balance and timing. He describes the three- to four-day process it took to turn a 40-pound “pipe of clay” into a 20-inch tall piece of art. “I wanted to take the pot out of round,” he says, explaining why he cut the thrown shape into four sections held together by visible rough “seams,” added a broken “collar” of clay and then paddled the result with a 2-by-4.

“I wanted to force the eye up and down. What I’m looking for is balance between sections, but also a rhythmic break.”

He calls the result “Calyx” and it’s just one of the pieces he’ll have on display at the St. Anthony Park Arts Festival, where he will be a featured artist. The name Calyx comes from a Classical Greek vase form, but says Solberg drily, “It sounds more fancy than it needs to.” It also hints where Solberg’s artistic influences lie. “Even though my work is pretty sculptural,” he explains, “it’s based on ancient forms. I like the vessel as a form.”

Solberg, who once served as the assistant to the legendary potter/sculptor Peter Voulkos, also claims a link between his work and the vocabulary of jazz. And Solberg should know. An accomplished jazz pianist who spent years touring as a professional musician before he ever threw his first pot, Solberg, 68, still performs four nights a week at Angelina’s Kitchen in Woodbury.

“There’s a rhythm to making pottery,” he says. “Both music and pottery are hard work, physical. You engage eyes, hands and the brain. I improvise in both forms. I go from not knowing to finding a way into a piece.”

He likes what he calls the “directness” of performing for a live audience in both his music and his pottery. Solberg is not one to dismiss the demands of the marketplace. “The perspective is different when you make your living from clay. You learn what people need,” he says. He considers himself lucky to have found “a small base of customers who have the same idea of art as me.” That recognition permits him to concentrate on creating art pieces that reflect the jazz values of “spontaneity and unpredictability.”

He credits his wife, Margaret, “who handles the business side” for getting him where he is today, but he also acknowledges that his current position of relative artistic freedom was built on a solid foundation of “25 years … making useful, serviceable mugs.”

“I will always make mugs,” he adds. “The best compliment I can get is when a customer tells me, ‘I bought a mug from you 20 years ago and I’m still using it.’ ”

You can see Solberg’s work in booth no. 50 at the festival, or you can find it at the Grand Hand Gallery in St. Paul, thegrandhand.com. —Judy Woodward