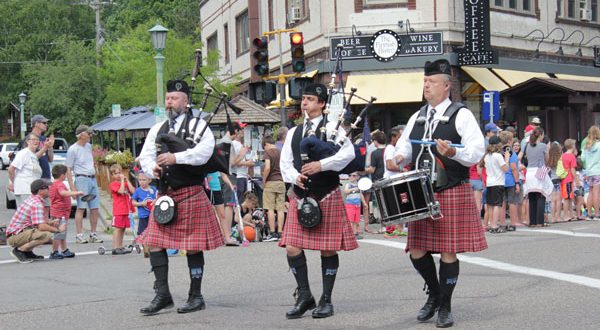 Crowds await the 4th in the Park parade. Photos by Kristal Leebrick

The 70th annual Fourth in the Park celebration included the annual parade down Como Avenue and picnic and fun at Langford Park. The morning began with 2- and 4-mile races through the St. Anthony Park neighborhood. The parade began at 11 a.m. and snaked its way to the park where the St. Anthony Park Community Band played lively tunes (even a few Christmas songs) and speakers included St. Paul Public Schools board member Jon Brodrick, state Rep. Alice Hausman and state Sen. John Marty.

Here are some scenes from the July 4 event, along with race results and the winners of the horseshoe, tennis and volley ball tournaments.

Just what you’ve all been waiting for: the results of the annual 4th in the Park horseshoe, tennis and volleyball tournaments and the 2- and 4-mile races.

Sunrise Banks Vice President Rick Beeson got a surprise attack of Silly String after he received the
Spirit of the Park Award.