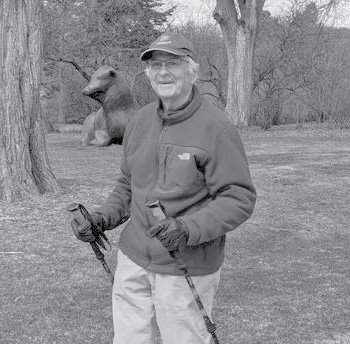 As Minnesotans “shelter-in-place” and embrace “social distancing,” many of them are turning to walking as one diversion to general quarantine measures.

For 95-year-old Paul Quie, the routine of daily walks is nothing new. In fact, you might even call that practice a cake walk for the longtime St. Anthony Park resident.

You see, the former University of Minnesota medical doctor and professor has been out hoofing it every day for the past 25 years. And not just taking short walks, but usual jaunts ranging up to 90 minutes, covering upwards of three miles per trip.

Quie loves walking and credits that daily practice for his longevity.

“Without this exercise, I probably wouldn’t be alive,” he said, noting that daily walks have helped maintain leg strength and have slowed the advancement of neuropathy in his feet.

As for his walking routes, Quie is a regular circulating in the St. Anthony Park neighborhood.

“St. Anthony Park is a perfect location for walking,” he said, adding that the campuses of Luther Seminary and University of Minnesota-St. Paul are among his most favorite places to take walks.

More recently, Quie said he has done lots of walking among the Minnesota State Fairgrounds in Falcon Heights. He enjoys the solitude of walking there, strolling along with his walking sticks and sometimes pairing up with his son David.

Before becoming a walker, Quie was a runner starting in the late 1970s. Back then, David promised to give up smoking if dad would take up running as a way to drop some weight.

Paul Quie embraced that challenge and before long was not only a diligent runner but one competing in marathons. His marathon journal included three trips to run in the Boston Marathon.

A few years later, Quie dropped back to jogging when distance running became too much of a grind, and then took up daily walking at about age 70.