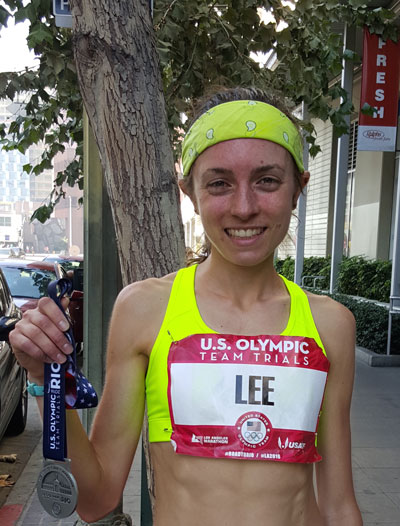 Editor’s note: Writer Anne Holzman interviewed St. Anthony Park resident Emma Lee before she left for the Olympic trials held Feb. 13 in Los Angeles. Lee placed 73rd out of 149 finishers with a time of 2:50:56. Nearly 200 women started the trial, but many dropped out due to the heat in Los Angeles that day, Lee said. After the race, Lee sent the Bugle an email with her photo and this comment: “I am doing well apart from some nasty blisters on my big toes, and I’m really happy with how my race went.”

After a frustrating start to her running career, Emma Lee found herself flying to Los Angeles in February to try out for the U.S. Olympic marathon team.

The St. Anthony Park resident, a 2009 graduate of Como Park Senior High School and 2013 graduate of St. Olaf College, ran Grandma’s Marathon in Duluth in 2014. Since then, she has been repeatedly stymied by injuries. But a recent change in rules for U.S. trials meant that her Grandma’s time 2:43:18 would qualify her to try out for the 2016 Olympics, so she worked with Como High coach Chris Lundstrom and got herself ready for the race.

Lee’s training runs have taken her on paths through Como, Roseville and Falcon Heights, as well as near her parents’ home in St. Anthony Park. As the race approached, Lee said, “If you see a girl in crazy Spandex doing a hill workout in front of your house, that’s probably me!”

Lee also lifts weights and does core-strengthening exercises. An avid cross-country skier in earlier years (she was one of those neighbors on roller skies a few summers back), she incorporated a few ski runs into her training, too. She said dietary preparation “is just getting enough to eat; it’s hard to take in enough calories to balance out a 100-plus mile week.”

She acknowledged that the L.A. weather might be a challenge after training in a Minnesota winter. “The high temperature is forecast to be in the 70s,” she said in the week before the run. “I plan to take fluids at every aid station to try not to get too dehydrated.”

She was looking forward to meeting other runners, including some “famous in the running world.” She said she and her mom would share a rented apartment with a woman she’d met at the Fargo Half Marathon in 2014. “It was cool to be able to make that connection,” she said.

Lee earned a master’s degree last spring and is now pursuing a doctorate in kinesiology/exercise physiology at the University of Minnesota. She said she would consider running professionally and hopes to work with athletes.

She would also consider work that inspires people to improve their health. “I love getting people excited about exercise,” Lee said, “because it is basically a free miracle drug that will cure myriad health problems.”

[ed. note: add results here if we can get it; race is Saturday]