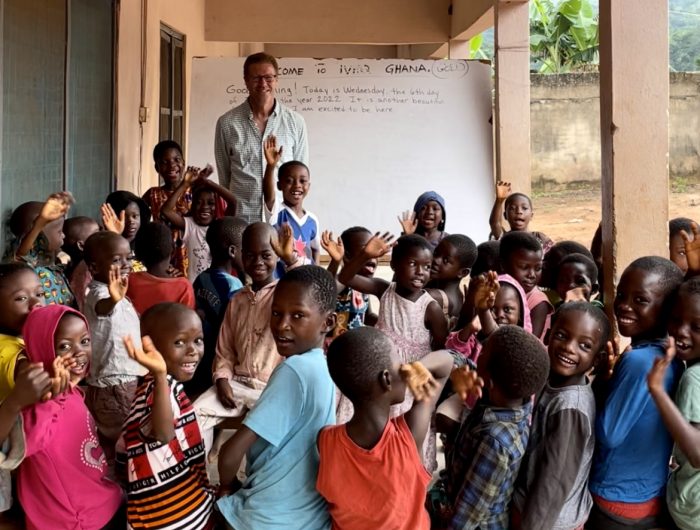 I spent the month of July in Africa. Two weeks in Ghana were followed by two weeks in Morocco. This was possible because of a grant I received from the Fund for Teachers and the St. Paul Foundation.

I will be eternally grateful.

My objective was to serve as a volunteer teacher and build relationships with students and staff in two distinct cultures. By immersing myself in educational settings and supporting already established local work, I was hoping to feel purposeful. I wanted to have a reason for being in Africa beyond touring.

I was fulfilled beyond my expectations. The daily interactions with my classes, the immersive residential experiences within my school communities, the challenges and new experiences and the ability to explore more of each country’s beauty from a home base within them — it all produced a powerful and impactful life experience.

This is not to say everything went as planned.

In Ghana, I was paired with the Volunteer Corps Organization. My placement was supporting education in a remote agricultural village of approximately 300 people.

On the one and only road, there’s a church, another church, an elementary school and a compound that lodges international volunteers—also serving as the hub of most activity for village kids when school isn’t in session.

My first day at the school was satisfying. I was asked to jump right in and teach a science lesson to sixth graders, followed by a fifth-grade math lesson. The structure was wonderful. There was a chalkboard, wooden desks, open windows with views of green hillsides and open doors with chickens strolling in and out.

Later that afternoon, school staff members informed me there wouldn’t be school tomorrow. A national teacher’s strike was going into effect.

Not part of the plan!

I wasn’t going to cross a picket line at the school (although teachers never came back to assemble one) so I talked with the volunteer program directors about what was possible. They decided to cook a breakfast meal for the kids at the compound the next morning, and I’d organize lessons and activities for those in attendance.

Fifty-four students arrived at the compound for breakfast on Tuesday and 54 stayed for the morning meeting I set up on a couple of benches. After some stories and songs, we had the youngest students join two volunteers who had signed up for child care, while I got to know the students ages 10 to 14 who became my class for two weeks.

(The strike was resolved after three weeks with the teachers receiving a 15% cost-of-living pay increase after asking for a 20% raise.)

As for teaching at the compound, it was difficult at first. There weren’t desks, books, paper, curriculum or content resources.

There were also frequent requests from students to “play football.” I held firm on “no football until lunch.” I implemented lessons I prepared while incorporating flexibility each morning, and after noon, it was play time.

English is the official language of Ghana but it’s not used by most Ghanaians in daily life. Akan languages such as Twi are abundant. The village kids all grow up with Twi before English is introduced at school. I learned enough Twi to earn smiles for trying.

The kids were smart and joyful, creative and fun. Their families were welcoming and trusting. The landscape was lush and green.

And as I departed the compound for a long ride to the airport, my smile was fueled by the warmth and spirit of the people who gave me an unforgettably rich and meaningful experience in their corner of Africa.

In Morocco, my teaching was organized through the Institute for Leadership and Communication Studies. I was told I’d be teaching conversational English to adults in the capital of Rabat. After two days of orientation and sightseeing in that gorgeous, modern city, I was sent to Casablanca “where there is more need.”

Not part of the plan!

I was transported via train and taxi to the Sidi Moumen Cultural Center in the infamous Sidi Moumen area of Casablanca, which exhibits intense poverty and noticeably high unemployment.

The infamy stems from the Casablanca suicide bombings of 2003 and 2007 that were orchestrated by young men from Sidi Moumen. Living and serving in this setting, I was not allowed to walk alone. My host family in the neighborhood looked out for me, fed me, gave me a place to sleep and became my friends despite my lack of Arabic.

I enjoyed trying to learn basics of the language, and attempting to use it helped build bridges.

As it turned out, there was indeed a need for my English teaching because the cultural center was running a month-long summer camp, providing language classes and enrichment activities to the neighborhood youth.

I taught a class of teenagers every morning, followed by a class of students ages eight through 12. Some of the teens spoke a little English from required coursework. The younger students were all beginners.

We worked on greetings, dialogues and acted out common verbs. I shared pictures of my life and America and we learned about each other’s cultures.

My afternoons included bonus conversations with a group of highly-motivated teens, insightful discussions and Arabic tutorials with the center’s staff, plus a bit of basketball.

The intensity of urban Morocco and Sidi Moumen challenged me, but the immersive experience was rewarding. The eager students I taught and the dedicated people running the center absolutely inspired me.

Beyond my four weeks dedicated to teaching, I toured each country on the weekends.

In Morocco I strolled along the Atlantic Ocean, walked inside the narrow, maze-like alleys of the medinas (original walled sections or quarters of a North African city), went to an overcrowded football match, hiked in the Atlas Mountains region and even rode a camel.

In Ghana, I saw historical sites of the capital city, Accra, navigated masses of humanity in open air markets, took a canopy walk high above the rainforest and felt the mist of Boti Waterfalls descending 100 feet.

My educational adventure in Africa was professional development in its most authentic form. It expanded my worldview, challenged my skill set, inspired new ideas, and put me on the continent where many of my students were born or have ancestral roots.

My experience gave me an instructive sample of being a minority and struggling with language. It doesn’t compare to daily challenges that many of my high school students endure, but a tiny taste of it will help me be mindful of adversities frequently faced in our schools.

I’m aware of my privilege. I’m aware of my good fortune. Receiving a fully funded grant made my goal of getting to Africa a reality. But aside from that, a Moroccan man reminded me how free we really are as Americans. “You have a blue U.S. passport that lets you go anywhere.”

He’s right. Alternatively, work visas and student visas are difficult to obtain for many people in Africa and around the world who would love to visit the U.S.

I am a privileged person from a privileged country. Many Americans, including myself, would do well to remember that even as we face our own internal challenges. I am full of gratitude for my recent travels and I’m inspired to continue supporting Como students as they develop into citizens of the world.