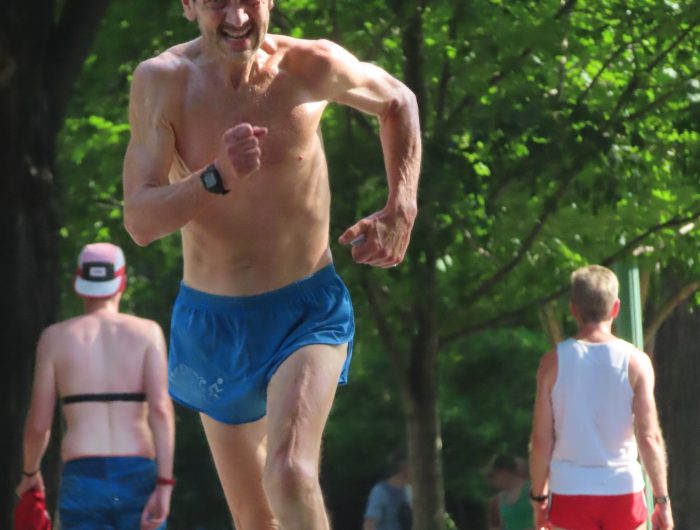 When Steve DeBoer crossed the finish line in Langford Park’s Fourth of July road race last month, he was mere blocks from his boyhood home on Raymond Avenue in St. Anthony Park.

But running has taken him so much farther.

Not long after taking up the sport as a high school freshman in 1968 to get in shape for basketball, DeBoer focused on running. Since 1971, he has logged at least a mile for what is now more than 18,000 consecutive days.

Back then he thought: Let’s see how many days I can do this.

“From early on, I thought, I’ll try to do that every day,” he said.

When people talk about streaks in athletics, Cal Ripken Jr.’s name comes to mind. The baseball hall of famer known as “The Iron Man” played in 2,632 consecutive games for the Baltimore Orioles over 17 seasons.

By July 4, it was at 18,291 days and counting, good for third place on the national registry maintained by the U.S. Running Streak Association (runeveryday.com). He chronicles his streak and his life during that time in a new, self-published book titled “Traversing the Tundra,” mirroring the name of the column he writes for the association’s quarterly newsletter.

DeBoer, 66, a retired Mayo Clinic registered dietitian, who has lived in Rochester since 1987, is younger than the two runners ahead of him on the list: Jon Sutherland, 70, of West Hills, Calif., and Jim Pearson, 77, of Marysville, Wash.

Because runners remain on the registry only as long as their streak is active, DeBoer sees a chance that he could someday move up to the No. 2 spot. The 1972 graduate of Murray High School realized early that he wasn’t an especially gifted athlete and that perseverance, not speed, was his forte as a runner.

His first attempt at making the junior varsity basketball team was rebuffed.

“The next year I made the team, but was the last guy on the bench,” he said.

He didn’t have much success on the cross-country team either.

“I was in two races in varsity and finished dead last in both,” he said. “That was my claim to fame.”

An early exercise regimen of calisthenics laid the foundation for his “streak” mentality. Still today, DeBoer, who is 5 feet 9½ inches and weighs in the low 140s, stretches and does 100 pushups every morning.

Running every day was unusual in the 1970s, DeBoer said.

“What’s really unusual is that Minnesota has had the most streak runners of any state for most of the past 50 years (235 people currently),” he said, “and that St. Paul had the most of any city in the 1970s and 1980s.” Back then, four were from St. Anthony Park.

“I was the second person from Minnesota to run daily for at least one year, my brother Dave was third, John Magnuson was sixth and Dad was seventh,” said De­Boer, noting that his father, Wendell, who died in 2014, was also the first person to run daily into his 50s, 60s and 80s.

The Langford Park race is a family reunion of sorts for the DeBoers.

He and his brothers Dave and Bob were the only three participants who ran the Langford race this year who did the first one in 1974, DeBoer said. He has run it 43 of the 47 times it has been held. Dave has done 42 and Bob 33.

DeBoer, who served two years in the Peace Corps after earning a degree in food science and nutrition from the University of Minnesota, estimates he has run 800 road races. His usual routine to maintain race shape: running six days a week in his neighborhood, with a longer run of 15 to 20 miles on Saturdays.

His best finish at 26.2 miles was 2 hours, 42 minutes in the 1989 Twin Cities Marathon. He has qualified before for the Boston Marathon and hopes to run it for the first time this October.

Building on his running streak has not been without setbacks, DeBoer said, including, at various times, a kidney stone, a broken ankle (he used a walking boot and pain meds to keep going) and double pneumonia.

“Continuing to run daily requires some good luck as well as determination,” he said. “I was fortunate to keep going.”

What’s next for DeBoer, who has no plans to stop his streak? He has two long-term goals:

Steve DeBoer’s book “Traversing the Tundra” can be purchased at tinyurl.com/SteveDeBoerBook.