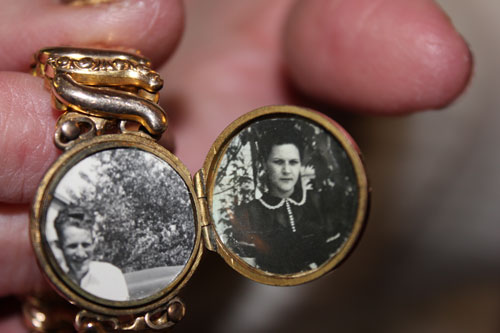 Still collecting after all these years

With snowy paws folded and a rosebud coat

A blue ribbon tied about a china throat

You lie above the fireplace where a red fire die

What about the stories that you could tell

Of long past years and other homes as well

As previous owners who loved you before

I saw you (and loved you) in an antique store.

The rosebuds that deck your china coat

Are undimmed with the years, and your smooth white throat

Still wears with an air its stiff blue bow;

What do you think about as tranquil and wise

There’s a poetic thread running through this issue of the Bugle, so we couldn’t resist printing the poem above to tell part of this story.

We don’t know who Luella Bender Carr is, but her poem was printed in a 1955 program written about the first meeting of the St. Anthony Park Antique Club, held on April 8, 1940.

Lillian Lehman reported to the club that poems appropriate to antiques had often been recited at the early club meetings, so she included “Staffordshire Cat” in the 15th anniversary program.

Seventy-five years after the antique club’s inaugural meeting in 1940, poems no longer show up in the minutes or meetings, the formal dress of heels and gloves has been tossed aside (“But we still don’t wear jeans,” said club historian Carole Mayers), and a silver coffee service and fine china aren’t required. In fact, Still collecting after all these years St. Anthony Park Antique club marks 75 years of antiquing when the group meets at a local church, they use paper plates and napkins.

Linda Maschwitz and Barb Swadburg look at pieces of antique jewelry, the subject of the March meeting.

But a group of women interested in “promoting the study and appreciation of antiques” still meets on the second Thursday of the month from September to May (except in January, when many of the members have left the state for warmer climes)—all of them collectors of many things old. (It takes just three of something to constitute a collection, Mayers said).

The club sometimes takes fieldtrips to view collections. They have visited the Elmer L. Anderson Library at the University of Minnesota to tour the Kerlan Collection of children’s literature and the Sherlock Holmes collection (the former governor’s wife, Eleanor, was a member of the antique club; she once hosted a meeting on political campaign buttons). They have lunched at the Lake Elmo Inn, which sports a great collection of salt-andpepper shakers, and in September, the club kicked off its 2014-15 year with a tour of historic Lakewood Cemetery in Minneapolis.

Regular meetings always include a speaker, and in March, the group gathered at Barb Swadburg’s home to hear Sandra Severt of Gloria’s Jewelry talk about Victorian jewelry.

Watch chains made of human hair were common in the Victorian era.

As Severt walked attendees through the jewelry trends set by style maven Queen Victoria in the mid- 1800s, she passed around antique pieces that included watch chains made of human hair (Queen Victoria wore a hair bracelet with her children’s baby teeth woven into it), cameos, and pieces made with precious stones popular in the queen’s day (coral was believed to fight off danger, and babies were given necklaces strung with coral beads for protection).

At the first club meeting in 1940, a Mrs. Kirk hosted and showed the group her paperweight and sandwich glass collections. The group began as an antique glass club, but eventually the name was changed to “antique club” and today’s members collect a variety of antiques. Judy Payne, who joined in 1998, said she looks for textile tools, as she’s a knitter and a weaver. She created the woven nametags members wear at each meeting.

Myrna Smith, who joined the club in 2012, collects antiques that have daffodils or lions on them, as well as Scandinavian items in honor of her Nordic heritage. Nancy Wenkel of Falcon Heights, who joined in 2006 when the club changed the bylaws to include members from outside of St. Anthony Park, collects a wide variety of things. Her home is filled with antique furniture, dolls, children’s books, treadle sewing machines and much, much more.

The most unusual collections of the group may be Mayers’ invalid feeder and baby bottle collections. Mayers, who joined the group in 1982, describes the invalid feeders as “an old person’s sippy cup.” They look like mustache cups with a spout, she said, and were used to feed people who couldn’t feed themselves.

“They came very decorative,” she said, as did baby bottles, which Mayers said she’s “down to 200” of now. Mayers—who operated her own antique business for more than 20 years—said she’s trying to whittle down her collections.

The most notable change to the club since its inception—besides the increase in annual dues from $1 in 1940 to $20 today—was to open the membership to women who live outside of St. Anthony Park in 2006.

Next month, the club will gather to hear Alice Neve, who joined the club last year after retiring from a career at St. Paul Public Library, speak about quilts. And members will revisit their bylaws once again. This time, to consider changing the words “open to women” in Article 3 of the bylaws to read “open to anyone” who is nominated by a current member.