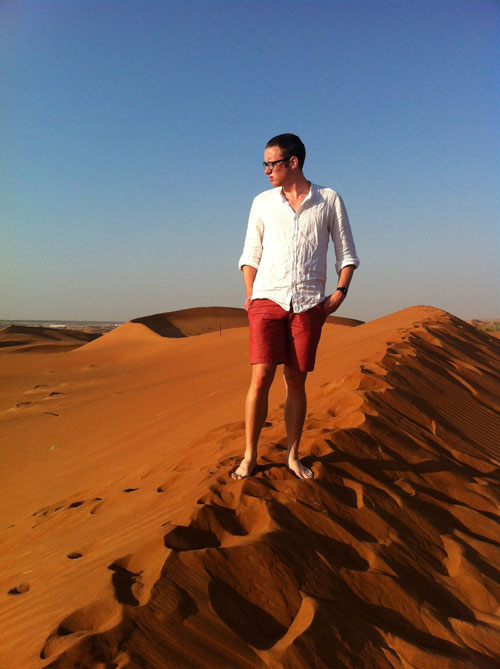 For many college-bound seniors, graduation day means the beginning of a new adventure: a new phase of life bereft of the watchful eyes of parents and a chance to be on their own and to live life on their own terms.

As a member of the 2010 graduating class at Como Park Senior High School, Amelia Kahn was in just that position. Her new adventure, however, would take her halfway around the world to the brand new Abu Dhabi campus of New York University (NYU) in the United Arab Emirates.

This spring Amelia will be part of the first graduating class from NYU Abu Dhabi—a collaborative effort between the world-class university in New York and the government of Abu Dhabi to establish a globalized research institution with a strong liberal arts program at its core.

The school actively recruits top students from all over the world. Amelia and another former Como student, Dean Shaff—now a sophomore at NYU Abu Dhabi—are two the admissions staff took a particular interest in. Both were given full ride scholarships, including room, board and airfare for breaks.

Having a global student body representing a multitude of ethnic, religious and cultural backgrounds is a central offering for NYU Abu Dhabi. The 148 students admitted to Amelia’s class of 2014 come from 40 countries across five continents.

“That was something I was looking for,” Amelia said, speaking of the school’s diversity. “A lot of colleges in the U.S. offer a multicultural life center, but really, that’s extra. Here, it’s a core part of the experience.”

It’s something Amelia and Dean both live everyday. One of Amelia’s roommates is from Ethiopia, another is from Brunei, while the fourth comes from Vietnam.

“That’s pretty par for the course here,” she said, recounting a particularly poignant moment when she and her Vietnamese roommate explained the Vietnam War to another housemate.

“St. Paul is a pretty diverse city, but I found a lot of the viewpoints I grew up with challenged at a very fundamental level,” she said.

For example, she was surprised to find many of her classmates found her use of the term “American” in reference to her nationality to be misappropriated. Many thought it ought to refer to someone from the American continent as a whole. The preferred demonym, rather, is U.S.-American.

“It was something I had never considered,” she said.

From issues surrounding the Israeli-Palestinian conflict, to the western image of the oppressed Muslim woman, having generalizations rattled was a welcome and regular experience, Amelia said.

That can be a major reward to studying abroad, said Molly McCurdy, a guidance counselor at Como Park Senior High. She recently visited Amelia and Dean in Abu Dhabi and said she encourages all her students to get out of St. Paul and travel.

“They are exposed to a different culture, language, traditions, history and way of life,” McCurdy said in an email. “These are gifts that a student cannot typically obtain from classroom work.”

For all the romantic visions people have of studying abroad, both Amelia and Dean say their everyday life in Abu Dhabi is surprisingly normal.

“I go to class, I eat in the dining hall, I play sports—I feel like to a certain degree I have a very normal college experience,” Dean said. “It just so happens that I live in Abu Dhabi.”

Amelia studied philosophy and Dean is majoring in physics with a minor in applied mathematics.

Students at NYU Abu Dhabi currently live on several floors rented out by the university in a skyscraper at the heart of the city. Most classrooms and campus facilities are in a separate building a couple of blocks away.

Next year, the campus will move to Saadiyat Island, which is envisioned to be a cultural epicenter for the oil-rich Persian Gulf state. In addition to the campus, the island will house reincarnations of the Louvre, Guggenheim and other internationally renowned cultural icons, as well as a lavish performing arts center.

Being located in the capital city provides a plethora of unique cultural and recreational opportunities. Both students say they enjoy the confluence of Western and Eastern influences that creates a vibrant scene of arts and cultural offerings. They speak fondly of the variety of ethnic cuisines, socializing in cafes over shisha (tobacco smoked in a water pipe, or hookah) and frequenting the pristine white sandy beach near campus.

Like other American colleges, bars are also a regular part of social life in Abu Dhabi for those of age.

“They have a lot of good ladies’ nights,” Amelia said.

A Western woman in an Arab state

Despite her mother’s worst fears, Amelia said her experience as a Western woman in Abu Dhabi has been far less controversial than many Westerners might expect.

She might get awkward stares on the street, but that’s likely more due to cultural differences in manners. She said it’s not considered rude to stare at people like it is in the U.S.

Abu Dhabi is actually one of the more progressive states in the Arab world. For the most part, there is a high degree of tolerance that might challenge some Western generalizations, Amelia said. Women are generally highly educated and wear, believe and say what they want.

“If you wanted to walk around in short shorts and a tank top, you wouldn’t be arrested. You wouldn’t be reprimanded on the street. It would just be really weird because that’s not usual here,” Amelia said.

Amelia and Dean both enjoy an uncommon opportunity for international travel at NYU Abu Dhabi.

“Abu Dhabi is literally in the middle of the world,” Dean said. “I can go to all these different places really easily and sometimes the school funds things like that.”

Dean has traveled to Thailand and India and looks forward to continuing to explore other parts of the world during his time in school.

Having been out of the country only twice before arriving in Abu Dhabi—once to Canada and once to Puerto Rico—Amelia’s passport is now filled with customs stamps.

She’s been to Georgia, Budapest, Israel, Palestine, Jordan, India, Chile, Spain, Nepal, Italy and more. For every unique destination, she has a list of stories to share with friends and family at home.

On one trip to Armenia, Amelia and a friend arrived at their bunks on an old Soviet train, only to find a tower of diapers overflowing on one bed and a pile of bananas on the other. Two Armenian women were transporting the goods to sell. They weren’t happy when they found Amelia and her friend moving their cache.

Following a heated exchange of what Amelia interpreted to be a mix of Armenian and Russian dialects, the train’s conductor stepped in to diffuse the situation. He showed Amelia and her friend to their own private cabin.

When mom comes to visit

Amelia’s mother, Kathy Kahn, a biology teacher at Como, will make the 20-hour flight to Abu Dhabi to watch her daughter graduate at the end of May.

She admits to having initial reservations, as most mothers might, about Amelia’s college choice. But she has since set aside her misconceptions and come to embrace her daughter’s wanderlust, she said.

Not having been overseas since she was 21, Kathy said she never would have considered traveling in the Middle East without Amelia.

“I’m really looking forward to being exposed to new cultures and new ideas and just what it looks like and what it feels like,” Kathy says. “I’m kind of hoping I can just let it wash over me.”

In addition to the usual tourist attractions, Amelia said she is excited to introduce her mom to the people and places that made up her life the last four years. She looks forward to bringing her to a shisha bar, and maybe even a ladies night at one of the city’s clubs.

While Amelia looks forward to returning home after graduation for a time, she said her international wanderlust is far from satisfied.

“At some point I’ll probably settle down in one place, but I could not tell you where,” she said.

For the immediate future, though, Amelia is looking forward to returning home for the temperate summer months in her home state.

“I love the summer in Minnesota. I’m looking forward to being home, being with my mom, hanging with my dog for a while,” she said. “Hopefully I can find a job somewhere, too.”

She also plans to spend part of the summer applying to master’s and doctorate programs in philosophy. She’s considering Harvard, Stanford and other American Ivy league schools, as well as Oxford and Cambridge in England, and some top-tier international universities.

Beyond that, Amelia said she’s open to wherever the world might call her.

“I couldn’t tell you a long term goal. I’m definitely looking at living in a lot of different places over the course of my life,” she said.

Kyle Mianulli is a freelance journalist in the Twin Cities and the communications coordinator at District 12.