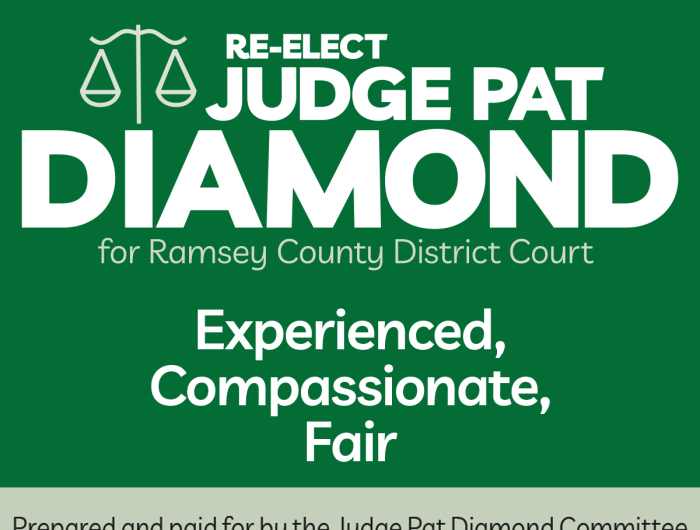 I am supporting the re-election of Judge Pat Diamond to the Ramsey County District Court.

Pat has been an excellent judge for eight years and his lifetime work of improving the justice system makes him the person we need on the bench. Even before becoming a judge, he helped create some of the specialty courts including those for veterans, the mentally ill and people caught up in substance abuse and driving drunk. Those courts work on getting defendants the help they need to become productive citizens, rather than just putting them behind bars.

While serving as lead judge for the court’s Juvenile and Family Division, the number of children held in custody before their cases are heard has dropped 45 percent. He also worked with county officials and Native American tribes to create court time specifically to focus on the needs of native children under the Indian Child Welfare Act.

Judge Diamond is a wise and patient judge who treats all defendants with courtesy and respect while maintaining order in the court room. He is a lifelong St. Paul resident who grew up on the East Side. I urge you to re-elect this compassionate and innovative judge on Nov. 3.