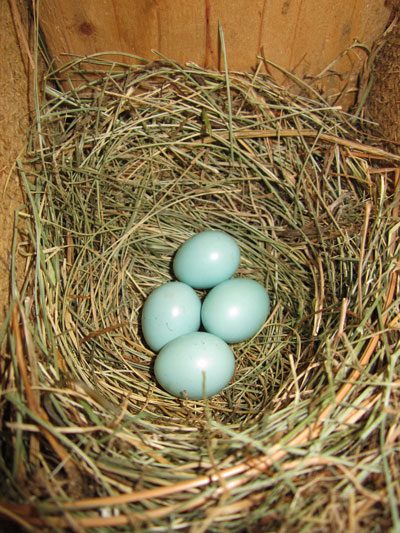 Bluebird eggs in a nest at Como Regional Park. (Photo by Sharon Shinomiya)

Would you like to see a bluebird? Take a walk through Como Regional Park and look and listen. Como is home to many bluebirds in the spring, summer and fall.

The birds are attracted to the park’s open grassy areas that provide easy access to the insects bluebirds need to feed themselves and their young. The park also hosts two bluebird trails—a series of nest boxes monitored regularly by volunteers—one on the golf course with 14 boxes and another in the park with 11.

Bluebirds nest in natural cavities. The decline in natural habitat and increased competition for nesting cavities from aggressive introduced species, such as house sparrows and starlings, led to dwindling bluebird numbers in the early 1900s. Bluebird trails were developed in the 1920s to help the birds maintain and increase their numbers.

Nine years ago, Como Park resident and bird enthusiast Val Cunningham read about bluebirds and thought it would be easy to help them. She contacted the Bluebird Recovery Program of Minnesota (BBRP), established in 1979, and the Como Park Golf Course, which agreed to be a location of the trail. With the assistance of BBRP, the trail began with 12 boxes.

“The first 30 years we lived here, we didn’t hear bluebirds in the park,” said Cunningham, who has lived near the park since 1974.

Now, it is common.

Together, these trails have fledged 445 bluebirds since 2005.

Bluebirds nest two or even three times each year, if weather permits. The female weaves a cup-shaped nest from pine needles or brown grass. She lays three to five pale blue (sometimes white) eggs, one each day, and begins to incubate the eggs after the last one is laid. Incubation lasts about two weeks. Young bluebirds fledge 16 to 22 days after hatching.

Other birds—chickadees, tree swallows, house wrens, cowbirds and house sparrows—use the trail boxes too. Chickadees and tree swallows nest only once a year, leaving the box open for bluebirds afterward. Wrens can be destructive, puncturing bluebird eggs in boxes they compete to use. Cowbirds lay eggs in the nests of other species; their babies develop faster than bluebirds, giving them an edge over their adopted siblings. These birds are native species and are covered under the Migratory Bird Treaty Act of 1918, which protects birds and their nests and eggs from interference. Non-native house sparrows are not protected under this act.

Trail monitors check each box at least once a week throughout the nesting season. To deter wrens, boxes are placed far from brushy areas that attract the birds. Many bluebirds are able to successfully raise their brood even with a cowbird or two deposited in their nests. House sparrow nesting materials are removed regularly from boxes, and the boxes are sited away from residential areas that attract the birds. House sparrows can be deadly competition for bluebirds, killing both young and adult bluebirds.

Boxes are placed with their openings facing away from prevailing winds, at least 300 feet apart from each other. Predator guards attached to posts or boxes deter raccoons and cats.

Monitors note the number of eggs laid and birds hatched and fledged and contribute those numbers to BBRP to be part of the permanent record. They clear out old nesting materials so new nest building can begin and keep the boxes in good repair. Vandalism and theft of boxes are occasional problems.

It can be heartbreaking to witness the loss of a nest, according to Cunningham, but she finds it wonderful to take part in and see the recovery of these beautiful birds. As she walks her trail in the wee hours of the morning, before golfers come out (to avoid both disturbing golfers’ games and the possibility of getting hit in the head by golf balls), she enjoys the wildlife surrounding her: Orioles singing, warblers flitting about, a hawk bathing in golf course sprinklers, owls swooping silently by and foxes on the move.

“The Como Park bluebird walk is a highlight of the camp,” said Audubon volunteer Karen Eckman. “For most campers, this is a first-ever experience and one they all really enjoy and remember.”

Want to find out more?

A bluebird trail tour will be offered Friday, June 6, 10-11 a.m., as part of the Urban Birding Festival of the Twin Cities. To register, call Faith Krogstad, 651-632-2455, or register online at apm.activecommunities.com/saintpaul/Activity_Search/24165.

St. Paul Parks and Recreation is offering a Birding Youth Camp for ages 8-12 in Como Regional Park on June 16-20, 9 a.m.-noon. The camp will be conducted by St. Paul Audubon Society volunteers. Register online at www.stpaul.gov/parks, or call 651-292-6508.

Be a bluebird trail monitor

St. Paul Parks and Recreation would add more bluebird trails if more people committed to maintaining them. Interested individuals or groups can find more information about volunteer programs at www.stpaul.gov/naturalresources. No nest boxes may be placed on park property without permission.

Learn more about the trail

To hear the Eastern bluebird song and call, go to www.allaboutbirds.org/guide/eastern_bluebird/sounds.