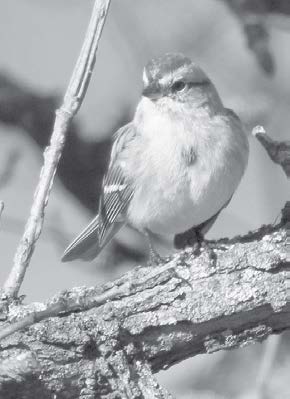 Taking a look at the American tree sparrow

One of my favorite book references is “Life Histories of North American Birds,” a 21-volume series by ornithologist Arthur Cleveland Bent, published between 1919 and 1968, under the auspices of the Smithsonian Institution.

The article on the American tree sparrow was written by A. Marguerite Baumgartner, who contended the tree sparrow’s song sounds like “Marguerite.” At the time, she was studying tree sparrows near Churchill, Manitoba, and it gets pretty lonely up there.

The tree sparrow breeds in far northern Canada where the only trees are stunted spruce and willows. In fact, Baumgartner thought the bird might be more properly called the brush sparrow because it usually nests on the ground and is seldom found in trees, summer or winter.

Baumgartner studied their nests and found lemming fur in some of them! I think that’s fascinating. I’ll bet the sparrows didn’t pluck the fur off a live lemming (running for a cliff!) but found clumps on bushes and such.

She also found the nests lined with Ptarmigan (grouse) feathers. I was in Churchill in June of 1995 and we were able to see a willow ptarmigan. It’s about the size of a large pigeon. The ptarmigan changes from an all-white winter plumage to speckly brown feathers for the summer. The bird we saw was still white on the bottom half, not quite fully dressed for summer.

The sparrows’ nests are usually on the ground in a grass tussock (bunch) or a shallow depression, rarely in a shrub or low tree. The nests are compact, made of grass, rootlets, moss, forbs (non-grass flowering plants), inner bark and, as Baumgartner noted, sometimes lined with feathers or fur.

Tree sparrows arrive at their northern habitat just about the time of the ptarmigan’s spring molt. The ground is littered with white feathers and the sparrows add these to their nests. I think it’s interesting that the tree sparrows we see here in Minnesota have spent time in the company of lemmings and ptarmigans.

The female lays three to five eggs, pale bluish- or greenish-white, marked with browns and blacks, and about eight-tenths of an inch in length. The female sits on the nest.

Insects in the far north become active in mid-June, so tree sparrows time their nesting to have nestlings about then. Young are fed nearly all insects; initially, parents masticate food for the nestlings. Having been in Churchill in mid-June, I know firsthand that the tree sparrows have picked a good time and place to get insects: Blackflies swarm any warm-blooded creature!

As the fledglings leave the nest to begin foraging on their own, their diet includes some spiders, seeds of grass, sedge, forbs, buds and catkins of willows and birches and a few berries.

At night, most of the birds roost individually in sheltered spots on the ground.

By December, most tree sparrows have headed south on their fall migration. Their wintering grounds are across the entire United States, a journey of 1,500 to 2,000 miles. It’s a trip they take at night.

The longevity record for the tree sparrow is 10 years, 9 months, but the average life span is probably 4 to 5 years.

Tree sparrows are with us here for the winter. They subsist mainly on seeds. I’ve seen a small group of tree sparrows foraging among grasses, leaping up to snatch seeds from the weed heads. Then pecking at the seeds that have fallen on the snow. Very resourceful.

I’ve never seen it, but tree sparrows have been known to roost under the snow’s surface. That sounds chilly on the face of it. But the snow would be good insulation from the wind. Tree sparrows can survive temperatures below -18 degrees Fahrenheit. They also roost in conifers.

Tree sparrows will readily come to feeders. One of their most diagnostic features is a bicolored beak, if you can get a good look at it. The upper mandible is black; the lower is bright yellow with a dusky tip.

And look for a clear gray breast with a single black “tie tack” on the chest. They have a chestnut cap, a rusty eye-line and two white wing bars. That chestnut cap brings to mind the chipping sparrow we see in the summer, which gives the tree sparrow its nickname of the winter chippy.

Most birds don’t sing much when they’re away from their breeding grounds, but the tree sparrow will sing on a bright and sunny day in winter. Their singing increases by February. American author Henry David Thoreau described their song as, “twitter twitter twe twe twe.” He said he thought their call sounded like the tinkling of an icicle.

And then, from early March to late May, with a peak in early April, they’ll take those long night flights back north to the tundra, to start the cycle again.