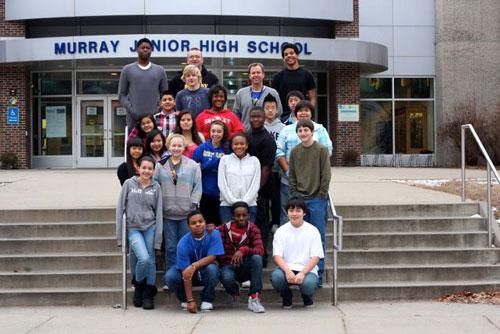 Tim Chase begins each school year by telling his students at Murray Junior High School how his “failed sales career” led him to his true calling as a science teacher.

“I grew up in southern Wisconsin, got a business degree and left for the Twin Cities to make my fame and fortune, and it wasn’t going well,” he explained. “My girlfriend, Donna, who later became my wife, suggested that I quit and do something I love.”

Chase, who has been teaching at Murray for 18 years, returned to school and became a science teacher.

“I really wanted to teach junior high school kids,” he said. “They’re young enough to be silly, but old enough to think critically, and science offers a lot for them to do and to be involved in.”

So when Peter Smerud, the executive director of Wolf Ridge Environmental Learning Center in Finland, Minn., approached Chase about a concept for a new science elective course, Chase was all ears.

Next fall, Murray will offer Ecology Inquiry Immersion: A Wolf Ridge Elective (EII) in partnership with Wolf Ridge. The course will combine chemistry, biology and earth science and culminate with a two-week summer trip to the environmental camp.

The course is aimed at eighth-graders who were in grade-level science classes in seventh grade but are ready to move into a more challenging curriculum. Wolf Ridge and Murray have a long history of working together. For the past 30 years, groups of Murray students have traveled to Wolf Ridge in November to take environmental classes.

“We call it our ‘leadership retreat,’ an environmental retreat where students lead other students into team-building activities and problem-solving,” Chase said. The retreat also takes a look at the variety of cultures represented at Murray. “Because we are a diverse school, we have student leaders teach about the different cultures that are represented in our school. This brings home that all these students, and all these cultures, live in St. Paul,” he said. “Our theme for the week is ‘We are more alike than different.’ ”

Wolf Ridge has a program where high school students take extra science classes after school and then come to Wolf Ridge for two weeks in the summer to work on individual projects and learn more about ecology.

“They wanted to expand this program into junior high, and Peter reached out to us,” Chase said. “[Smerud] said, ‘Murray has a diverse population, and you celebrate it, and we want to reach out to students of color.’ ” Chase and Tim Williams, principal of Murray, worked together to create the EII program.

“It’s a two-trimester course where the students will get additional exposure to chemistry, biology and earth science,” Chase said. The EII program will also bridge a gap.

“When students are in seventh grade, some are placed into an advanced pathway that allows them to complete seventh-, eighth- and ninth-grade standards,” said Chase. “When they go to high school, they immediately go into a 10th-grade biology class. The other is a regular science pathway where students meet seventh- and eighth-grade standards. That’s great, but that decision is made in seventh grade, and some students mature over these two years. During that time, many might be ready to take additional science and go into that 10th-grade biology class [in ninth grade]. However, we haven’t had a way to make that happen.”

The EII program would open the doors for those students. “Students who may have missed out during that seventh-grade decision-making process will now they have this on-ramp to this challenge pathway,” he said.

Chase introduced the new course to current seventh-graders at Murray, who had to apply to be in the class.

“I went to all of the earth science classes and had them contact me if interested,” he said. “I then contacted parents to see if they were OK with their child enrolling in the class and spending two weeks at Wolf Ridge during the summer.”

Twenty-two students enrolled in the class. Chase hopes this will be a life-changing experience for the students. “They can go into high school and skip that ninth-grade science curriculum because they’ll get through this program. This will open more electives for them for whatever their interests are, whether it’s art, science, social studies and so on.”

EII consists of two experiences at Wolf Ridge: a weekend orientation in May and then students will return for two weeks in July.

“During that time, students will do individual environmental inquiry where they will look at nature and see how something has an effect on something else,” Chase said. “For example, how does the soil type affect the type of plants that grow there? How much does the tree canopy affect the types of plants growing underneath it? These are typical questions that a student might experiment with and collect data on. They will learn the process of science.”

The St. Anthony Park Community Foundation has played a big role in helping bring this class to fruition, Chase said. “The foundation sees the extreme value in this program and is willing to lend support for our students.”

The foundation is helping find funding from several sources, said Jon Schumacher, the foundation’s executive director. Since many of the students will be going on to Como Park Senior High School, Chase hopes Murray will be able to monitor EII’s success.

“We’ll know how many of these students, after completing this program, will go into that 10th-grade biology class,” Chase said, “and we’ll see how many of them are successful in it. “The big dream is to get more students involved in these fast tracks.”

Chase believes the outside world is his classroom. “Once students are studying outside,” he said, “they can make inferences from direct observation. It’s a powerful way to understand the world we live in.”

Natalie Zett has been writing for the Park Bugle since the early 1990s. Her work has appeared in a number of Twin Cities publications, including Metro Lutheran, American Jewish News, and Minnesota Monthly.