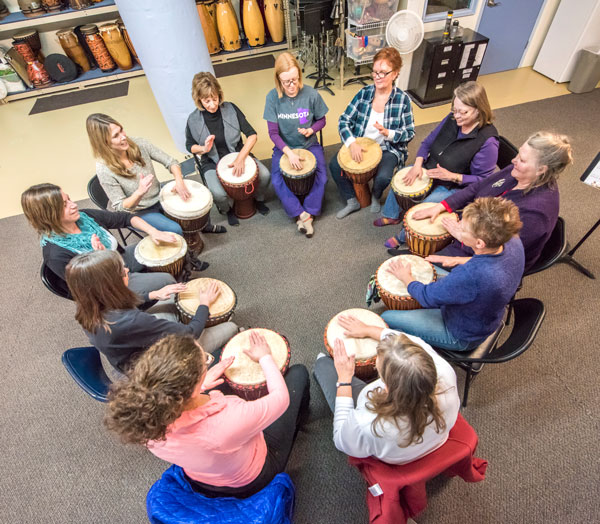 The beat goes on

It relieves stress. It calms as well as energizes. It’s rhythmic; it’s social; it doesn’t take much in the way of training or equipment; it’s easy to master, but capable of challenging the proficient. It makes satisfyingly loud noises, but it is usually performed while seated in comfort.

“It” is the ancient art of drumming, taught and performed daily at the Women’s Drum Center on University Avenue.

The center recently celebrated its 25th anniversary and, on an early winter night, board chair and drumming instructor Bettie Seitzer and some of her beginning students gathered in a circle in the basement of the center’s headquarters in the Dow Building, 2242 W. University Ave., to demonstrate the deeply resonant psychological benefits of thumping on gracefully shaped West African drums called djembes (pronounced JEM-bay)

Then came a call-and-response with Seitz setting the pattern, while the students imitated her motifs. The women’s drumming synchronized immediately, and soon they were looking at each other with the pleased expressions of individuals who rediscover each week how much greater the sum can be than the parts.

Seitzer didn’t stop there. This may be a beginner’s group, but she has more sophisticated rhythms in mind. Pretty soon, half the group was pounding out the rhythm of an old commercial jingle “Cuckoo for Cocoa Puffs.” Seitzer calls it a mnemonic, and the musical situation got really interesting when she set the other half of the group to work on a different, contrapuntal jingle to the beat of “Sittin’ in the kitchen, just eatin’ pancakes.” Soon a sophisticated, syncopated, mesmerizing soundscape rose from the small circle of drums.

This was not just fun. It was music.

Seitzer explains that the words are relatively recent additions to what are traditional West African rhythms. “With the djembe,” she says, “there’s a really rich tradition of West African music.”

It was because of that tradition and others that the Drum Center was founded a quarter century ago to make drumming available to women.

“It was started,” says Seitzer, “by a group of socially active women, connected to the women’s rights movement. Men had taken over drumming and there were no opportunities for women [in the rhythm section of pop culture].”

The center remains the only registered, women-focused drumming enterprise in the nation. Still, over the years as the founders moved on, the center has become less overtly political. It even offers regular coeducational drumming sessions now. Although it continues to sponsor performance groups and nurture professional drummers, the center has also added classes for women who have no percussive ambitions beyond having a good time.

Groups from the center perform at the annual Minneapolis “Breast Cancer Walk and lots of fundraisers,” says Seitzer. They also have outreach programs called Health Rhythms and Energy through Drumming, which bring their beat to seniors and schools.

And then there are some less obvious benefits.

“Drumming builds confidence and happiness,” says Seitzer, who works as a project manager for a local bank when she’s not laying down a beat.

“Women really develop a sense of pride in themselves when [they] see weekly progress. We don’t always feel that in our daily lives.”

At times, drumming can have a therapeutic effect on both audiences and performers. “All through the [presidential] campaign, people were so sick of the hate-mongering,” Seitzer says, “and then they would come in and say, ‘It feels so good to drum.’”

Although Seitzer acknowledges that she played in a “bluegrass band after college,” she insists, “you need absolutely no training to start. You don’t even need to own a drum.”

The center provides djembe and other drums to its students during class time. Seitzer says she’s never been much of a TV watcher, so when

a friend gave her a gift certificate to an after-work Drum Center class six years ago, “I was hooked in the first five minutes.”

As her skill increased, she moved up to teaching.

“I like being with a group that makes music,” she says. “It just enriches my life. I’m a teacher by nature.”

Her students, who range in age from 30 to late middle age, bring varying levels of musical preparation to the class. No matter, says Seitzer. She compares the first steps in drumming to “rhythm time in kindergarten” and says, “this is a safe place to try,”

Kathy, 64, a retired professor of nursing, comes from Fridley for the weekly session. “It’s the one place I have no responsibilities,” she says, “I can laugh; it’s fun—a good stress reliever.”

Fellow student Karen, 58, from the Longfellow neighborhood of Minneapolis, says she “likes the sense of community” in drumming.

Minneapolis resident Claire, 30, who began the class just a few weeks ago, said of her first time, “It felt very mindful in the moment.”

As the class embarks on more

complex, syncopated drumming patterns, Seitzer notes that drumming is “brain exercise” as much as “learning muscle movement and muscle memory.” She thinks that all students begin because they’re looking for a “nonstressful way to have fun,” but some may not leave it at that.

The center offers additional classes like Women Who Groove, Brazilian Festival Drumming and a workshop called Drumming through the Chakras. The truly committed student may go on to DrumHeart, a small ensemble that maintains a busy performance schedule and is open on the basis of a successful audition and the director’s approval.

Does the center have any big- picture goals beyond having rhythm-based fun? “We want to drum positive energy into the world,” says Seitzer.

You can reach the Women’s Drum Center at 651-206-7617 or check out the website at www.womensdrumcenter.org for more information.

Judy Woodward is a reference librarian at the Roseville Library and a frequent contributor to the Park Bugle.