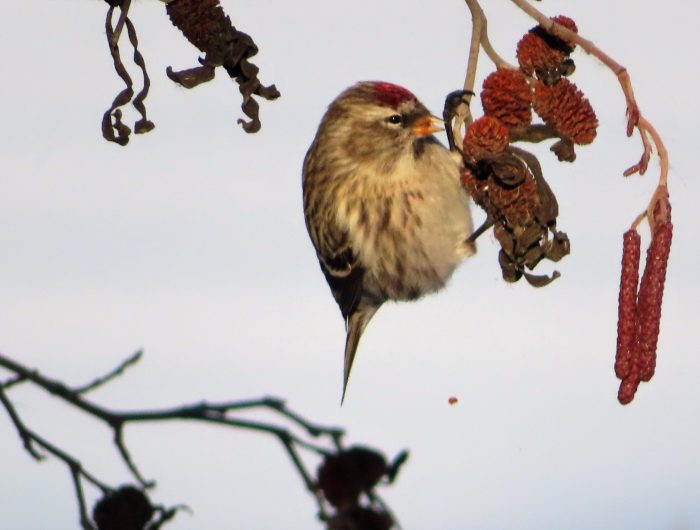 The other morning, I got a text message from my neighbor Barb asking for help identifying a bird she had at her feeder. I looked at the photo and recognized it as an American Goldfinch. They lose a lot of their yellow color this time of year.

Then I told her I had a small flock of Common Redpolls at my feeders just a few minutes earlier and suggested that she be on the lookout for them since she’s only a block away.

Barb allowed as how she was going to have to look them up. She did so, and texted back, “Oh, those are gorgeous!”

And so they are.

The Common Redpoll is five inches long with a bright red patch on the forehead, a black chin and black in front of the eyes. They’re gray-brown overall with a streaky back and wings with narrow white wing bars. Males and females look alike, except that the male usually has a rosy breast.

Redpolls have a tiny bill, like that of a Pine Siskin. In fact, the German name translates to “Birch Siskin.” They perform acrobatics to get at birch and alder seeds. Those seeds grow in pendulous catkins.

A Redpoll will often grab the catkin and a branch with the same foot and then poke away at the seeds. Sometimes they’ll just shake the seeds out of the catkin and then drop to the snow below to gobble them up.

Redpolls have a nice adaptation that allows them to scarf seeds now, crack and eat them later. They have an esophageal diverticulum, or pouch, in the side of their throat where they can store uncracked seeds for later munching. They get to a safe resting place, then hack up a seed, crack it open and munch it at leisure.

Common Redpolls are a regular migrant and visitor to Minnesota with the bulk of their migration occurring between mid-March and mid-April. But they are not very common to me. Their name distinguishes them from the Hoary Redpoll, a whiter, rarer cousin that is occasionally mixed in with a flock of Commons.

I even have trouble remembering the name “Redpoll.” The red part comes from the red patch on their forehead, but “poll” is a reference to the Middle English word for head, “pol.”

I don’t see Redpolls every year. But the first time, I saw one, I struggled learning what they are called. I go to my field guide and search skinny little finch-like birds until I find it, or the name comes to me.

Redpolls are circumpolar birds with a large range. In North America, they breed from Alaska to Newfoundland. On the other side of the world, they breed from Scandinavia across northern and central Russia, Siberia and south. Their range in any one year varies with food availability.

The Redpolls breed in scrubby areas of the high Arctic from late May through June. Their nest is a cup of fine twigs built on a base of larger twigs. The cup is lined with rootlets, lichens, moss and grass, finished off with a thick layer of ptarmigan (grouse) feathers.

The female does most of the nest building. She lays four or five eggs, pale green to bluish in color, with purple spots at the large end. The eggs are about 7/10 of an inch long.

Not only does the female Redpoll build the nest and lay the eggs, she keeps the eggs warm and turns them regularly for the 10-day incubation period. After the eggs hatch, it takes another dozen days before the nestlings are ready to fledge, leave the nest.

The female has a lot invested in this clutch of eggs. The male does bring her food while she’s incubating, but it sounds to me like she’s got a hard life.

Redpolls are very social birds. Flocks of 50 birds are not uncommon and in migration, they can gather in the thousands. They also seem very tame and approachable.

Redpolls don’t accumulate much fat, but they can tolerate extremely low temperatures. They have good insulation. The pine nuts, birch, spruce and weed seeds they eat are high-energy food sources. And they remain active at low-light intensity, which is helpful in the far north.

In Alaska, Redpolls have been seen entering holes in the snow to feed on the ground when the vegetation is covered. They forage under the snow and may also roost there to conserve heat. When it’s time to roost, they’ve even been seen dropping from a tree into the snow, spending the night buried in the snow.

So, the next time I’m in the Arctic, I’ll try to tread quietly, looking for holes in the snow and listening for a tiny hacking sound as a Redpoll coughs up a seed to chew on.