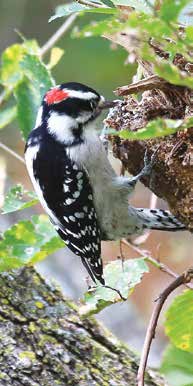 The drumbeat of the woodpeckers

This winter I’ve been trying to learn to identify woodpeckers by their drumming. I’ve been hearing a lot of drumming as I take the dog out for walks in the mornings.

But I rarely see the woodpecker who’s making the sound. It seems that the woodpecker is always on the other side of the trunk or the branch and I can’t see it. That’s made it hard to learn what species is doing the drumming.

Woodpeckers drum for several reasons. The male may drum to attract a mate or to communicate with its partner. You can often hear the mate drum back in response, to let the male know where she is. I’ve tried to figure out what species of woodpecker is making which drumming pattern, but there are only a few I can recognize.

Often, the woodpecker will vocalize during a pause in its drumming. That’s one way I can get a clue as to what species is doing the thwacking.

The downy woodpecker is the smallest of our woodpeckers. It’s a bird with a white tummy, black and white wings, and a white patch on its back that supposedly resembles down, hence its name. Even though it’s small, I’ve heard a downy woodpecker giving a very healthy drumming to a telephone pole. The male has a red patch on the back of its head. The female’s head has no such patch. The vocalization of the downy is “pick-pick.” I learned to remember this by thinking of short bill, short vowel sound. They also do a whinny, a descending call.

The hairy woodpecker looks just like the downy, but it’s a bit larger. I can usually identify it by its longer bill. I tell beginning birders in order to separate downies and hairies, imagine taking it by the beak, bend that beak back along the side of the head (don’t try this with the bird itself!), and, if the beak extends beyond the eye, it’s a hairy woodpecker.

If you’re fortunate enough to see a downy and a hairy close to one another, the size difference is pretty obvious. But you usually only see one or the other, not both at once. Here that white patch on the back of the hairy is said to resemble hair, rather than the down on the smaller woodpecker. The hairy call is a very energetic “peek.” The memory aid is long bill, long vowel sound.

The red-bellied woodpecker is one that often confuses folks. Years ago, when bird identification was done over the end of a gun barrel, this bird was first identified “in hand.” And when you can fluff away the body feathers on the stomach, you’ll see a pink/red down against the skin.

Sometimes, if you’re looking up at a red-bellied woodpecker perched above you, and it’s a breezy day, you can see that undercoat of pinkish down. Both the male and the female have bright red on the back and top of the head; the male’s red patch starts at its bill and is larger than the female’s. The red on the female’s head starts at the top of the head and goes back. The red-­bellied is just a bit larger than the hairy woodpecker. A red-bellied woodpecker will often vocalize along with its drumming, giving a “chuck-chuck” or a loud “churrr,” which helps me recognize its drumming.

When I first heard of a woodpecker named the yellow-­bellied sapsucker, I almost lost it! I thought the name was made up. It sounded like something I would have yelled at a grade school bully on the playground. And then I saw the bird. It’s a good-looking bird about the size of the hairy woodpecker with a white stripe down its folded wing. The male has a red throat; the female’s is white.

This woodpecker makes an area of small holes on the trunk of a tree in spring. These are called sap wells, holes that collect sap. Insects come to taste the sap, get stuck, and make a handy snack for the returning sapsucker, and other birds who’ve learned the trick. The drumming of the yellow-bellied sapsucker starts strong and then tails off to a few disconnected raps. It’s another rhythm I can usually recognize.

The pileated woodpecker is our largest woodpecker. It’s the size of a crow. The pileated woodpecker’s drumming rhythm is distinctive. It’s a solid whacking that echoes through the woods. It also gives a “cuk-cuk” call that rises in volume and pitch and then falls off. The call reminds me of Woody Woodpecker of cartoon fame. The pileated looks a lot like Woody also, with a red plume of feathers on the top of its head.

I’ve learned to identify a few woodpecker species by their drumming. But it helps if they vocalize or show themselves. This is quite a fun challenge!