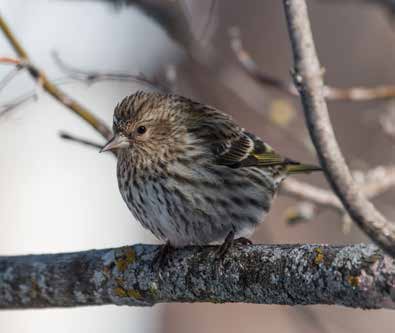 The joy of Pine Siskins

I really enjoy seeing at my feeders the Pine Siskins, a delicate little bird, about the same size and shape as an American goldfinch. They’re brown with heavy streaking and a light wingbar. Males have faint yellow highlights in the edges of the wings and tail.

But the feature that gets me thinking, “Hey! Pine Siskin!” is the needle-sharp bill. It’s not the wedge-shaped seed cracker bill of the goldfinch or of one of the sparrows. They use that needle-sharp bill to get pine seeds out of pine cones.

Noted bird expert Pete Dunne describes the Pine Siskin in his “Essential Field Guide Companion” as “a quick, nervous, dark, drab, ultra-streaky pipsqueak of a bird that makes up in sass and belligerence what it lacks in size.” He adds that the siskin “resembles a gaunt, streaky goldfinch, but has a distinctly longer, thinner, pointier bill, a narrow chest, and a short thin tail.” That tail is forked. Dunne says the bird’s “expression is myopic, beady-eyed.”

Pine Siskin nest in pine trees, hence their name. They not only use coniferous forests, but also dwell in artificial settings such as arboretums, cemeteries, Christmas tree plantations, and the like. They sometimes nest colonially, near one another. The nest is usually well out from the trunk of the tree, concealed on a horizontal branch, an average of 20 feet above the ground. It’s about 4 inches in outside diameter, an inch-and-a-half deep, with a 2-inch inside diameter.

The female Siskin builds her nest using materials she finds available: fine twigs, grasses, leaves, and lichens, woven with rootlets, strips of grapevine or cedar bark. The nest cup is lined with hair, rabbit fur, feathers, grass, moss, wool, and thistle down. With all that wool and fur, it would behoove farmers to keep an eye on their sheep and bunnies.

Sometime between mid-April and late May, the female lays three or four pale greenish blue eggs, spotted with browns and black. Incubation lasts about 13 days, with the male feeding the female while she sits on the nest.

Pine Siskin sometimes gather in large feeding flocks of up to 50 individuals. They feed on a variety of seeds, which means they’re not tied to the potentially varying pine cone crop. Besides pine seeds, they eat alder, birch, and willow seeds. They usually start at the top of a tree and work their way downward. They also like ragweed and other weed seeds, including dandelion seeds. That’s a plus, but they’ve been known to wreck spring gardens, pulling up newly sprouting seedlings.

About one-sixth of the Pine Siskin’s diet is animal: caterpillars, plant lice, scale insects, grasshoppers, spiders, flies and cocoons. They will eat the larva, pupae and even fresh egg masses of the spruce budworm. That’s an important contribution to limiting this pest of our forests. They have been seen opening the gall of the sawfly on the underside of oak leaves. They sometimes hang head downward while feeding.

I don’t get to see Pine Siskins every year. I don’t recall ever seeing a sizable flock of them. They’re somewhat irruptive, coming and going without much rhyme or reason. I saw a couple in November and December last year, then again starting in April this year. They visited my Niger/sunflower seed feeder several times that month and a dozen or so days in May. The last record I have of them for this spring was on June 1. They spend the summer in Canada.

I mentioned that the “pine” in Pine Siskin comes from their preferred nesting site. But my copy of “Dictionary of Birds of the United States” says the origin of the “siskin” part is unclear. It’s named after the European siskin, probably an onomatopoeic reference to this bird found in many European languages, “which usually translates as a chirper or a small bird.” The bird’s song sounds like that of a hoarse goldfinch, mixed in with a distinctive rising bzzzzzt.

Enemies of the Pine Siskin include domestic cats that prey on the birds at feeder sites and at their nests. Other predators include red squirrels, which rob nests of eggs and nestlings, even nesting adult birds. Siskins are prey to sharp-shinned hawks and, to a lesser extent, Cooper’s hawks. Shrikes may also be a threat, as siskins have a tendency to “freeze” when a shrike is sighted in the area. They also get “nervous” in the presence of flying blue jays and common crows, which may indicate that these larger birds have raided siskin nests . . . they are opportunistic omnivores.

As I said, I don’t get to see Pine Siskins every year. But I count it a joy any time I see even one or two of them. Someday, maybe I’ll see a flock of 50!