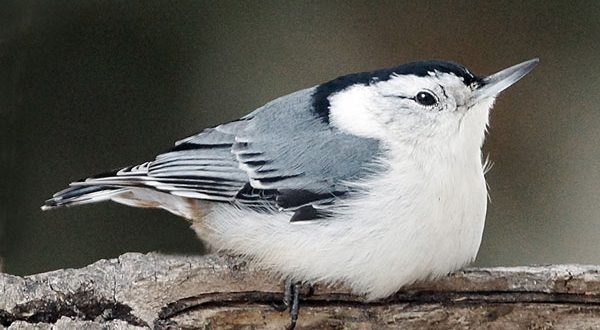 The nuthatch is an acrobatic and friendly little bird

I really enjoy looking through old bird magazines and the like, looking for nuggets that I can share with my readers. The title for this column comes from an article in the February 1903 edition of “American Ornithology,” a small-format monthly magazine of about 50 pages. It has black-and-white photos of birds, some poetry, a column for young folks and letters from readers, at 10 cents a copy.

The article is about the members of the nuthatch family, birds that are very comfortable inching their way headfirst down a tree trunk.

They’ll sometimes pause as they head down the trunk and bend their head way back, perpendicular to the trunk, so they can look around to see if there are any predators nearby. Nuthatches are regular visitors at bird feeders. When they come in to a feeder, they almost always land head down or immediately turn that way.

The white-breasted nuthatch is 5 to 6 inches long. The male has a dark black cap. The female’s cap is more of a gray. Each has a black collar, a blue-gray back, a white face and white undersides. The undertail coverts are chestnut. The bill is nearly as long as the head and seems to tilt slightly upward.

The average weight of a white-breasted nuthatch is 21 grams, the equivalent of four nickels.

In his “Essential Field Guide Companion,” nationally renowned author Pete Dunne describes the white-breasted nuthatch as “a chunky, neckless, child’s fist-sized wind-up toy of a bird whose ability to hop head-first down tree trunks distinguishes it as a nuthatch.”

A nuthatch foraging for food will probe bark crevices, but it will also chip away bark with its beak to reveal food hidden in crevices. When individuals find a food item, they often wedge it into a bark crevice and hammer with the bill to open or tear it apart. The name nuthatch is a corruption of nuthack, in reference to this feeding behavior of wedging a nut in tree bark and pecking at it until it breaks open.

Nuthatches are acrobatic. I have a platform feeder that has a rectangular screen floor with a post at each corner, supporting a roof. Recently, a white-breasted nuthatch landed on the edge of the tray and then proceeded to work its way underneath the screen, probing for morsels from the underside, perfectly at ease being upside down.

Nuthatches are pretty much permanent residents in their territory. They eat a variety of insects and plant matter, including acorns, nuts, etc. In the fall and winter, they scatterhoard food. That is, they disperse stores throughout their territory, using each storage site or cache location only once, storing just one item in each place.

They do join mixed flocks of chickadees and woodpeckers that roam about their territory looking for food. There’s safety in numbers. But when they come to the edge of their territory, they drop out of the group and the nuthatch pair residing in the new territory takes their place.

Courtship behavior starts at the end of winter. There’s much chatting back and forth between the pair. They often give a nasal yank-yank-yank as they keep in touch with each other.

Nuthatches are cavity nesters, using natural cavities or old woodpecker holes. They don’t excavate a cavity on their own, but may enlarge existing holes.

Some nuthatches perform an activity called bill sweeping, in which the bird sweeps the inside and outside of the cavity with a crushed insect, usually a beetle that exudes a pungent oil. One nest was found lined with cigarette butts and their nicotine laden filters. These may be attempts at chemical defense against tree squirrels.

The female lines the cavity with bark shreds, twigs, grasses, rootlets, fur and hair. She lays an average of six eggs, incubates for about 12 days, and has fledglings 26 days after hatching. The male feeds the female while she’s on the nest and the new arrivals when they’ve hatched.

White-breasted nuthatches seem quite accepting of humans. My buddy Jim and I had a family of Mom, Pop and three or four youngsters skipping all over the big maple in Jim’s yard, yanking at each other, kids begging for morsels from their parents, unconcerned about us.

One year, during a snowy Christmas Bird Count, we had a nuthatch fly just ahead of us as we hiked the trail. It spent some 15 minutes leading or catching up with us. I guess it wanted to be sure it got counted.

I love this friendly, inverted “wind-up toy” of a bird.

Clay Christensen lives and writes in Lauderdale. His book “The Birdman of Lauderdale” is available at local bird and bookstores.