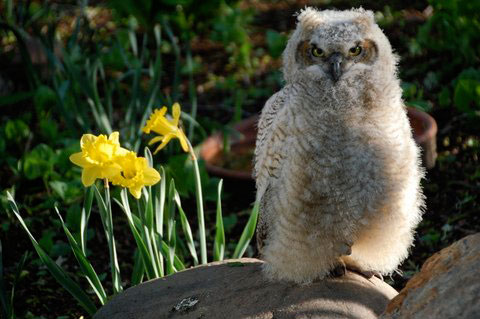 The owl babies of University Grove

University Grove resident David Wark took this photo of one of the great horned owl chicks now “hanging out” in the Falcon Heights community.

The sight of two great horned owl chicks hanging out in the brushy commons on Northrup Street last week was a celebratory event for neighbors in the University Grove community of Falcon Heights.

Their appearance together means the two owls—one hatched in a tree on that block and the other an orphan rescued from a clear-cutting site in Hudson, Wis.—are now siblings, said Karen Kloser, whose white oak is the place where this story began.

The two were brought together on May 5, after the University of Minnesota Raptor Center was called to help with a chick that had fallen, along with its nest, from the tree in Kloser’s yard.

That tree had become home to two adult owls sometime in November, Kloser said. That’s when she and neighbors began hearing the owls call in the mornings and evenings. In March, a neighbor saw one of the birds fly into a nest in Kloser’s tree “and that’s when we realized where [they were],” Kloser said.

With no leaves on the trees at that time, neighbors had a good view of the owls. “It was marvelous to watch the behavior day in and day out, and then the baby appeared in late March and that was even more exciting,” Kloser said.

That “adorable little white fluff of down” drew continuous crowds to her front yard. Neighbors came with cameras, telescopes, binoculars, and they watched the adult owls keeping the chick well-fed, Kloser said.

On April 23, the chick was seen on the tree branch outside the nest. Hours later, the nest imploded into Kloser’s yard and the chick was gone.

Folks in University Grove lost sight of the chick until May 5, when Rebecca Montgomery, Kloser’s next-door neighbor, found it on her front stoop. She called the Raptor Center.

Julie Ponder, executive director of the center, said what happened on Northrup Street is a normal occurrence with great horned owls.

“They are our earliest nesters,” she said. “They adopt nests used by someone else. They do no home improvement and the nests don’t have a lot of integrity. Chicks fall. We go and help get chicks up [into a tree] to get them away from kids, dogs and cars.”

When the Raptor Center volunteer arrived, she realized the chick was probably the only one in the brood. And the Raptor Center had an orphan about the same age that had lost its family. That chick was found in Hudson after an area was cleared of trees.

“It was not a safe place and there was no place where we could safely put the chick,” Ponder said.

The Raptor Center brought the chick to the St. Paul Campus.

“Two is the average size of an owl clutch,” Ponder said, “and the nice thing about great horned owls is they either can’t count, don’t count or don’t care. They will adopt chicks in the area. They are very welcoming.”

Karen Kloser caught the two owl chicks in a tree.

On May 11, Kloser sent an email to the Bugle saying, “The Raptor Center orphan owl and our baby owl are now siblings.” Neighbors have reported seeing the chicks together and have sighted the parents watching the humans who are watching the babies.

Eventually the great horned owls will leave, Ponder said, but they will stay in a family group in the area for some time.

“They’ll start getting a larger and larger range and have less movement in the day,” she said. “They will be less visible, but they will still be there for quite a while yet.

“Great horned owls are the earliest nesters but the slowest to get independence.”

David Wark, who snapped the photo of one of the chicks (shown above), said the neighbors refer to the owls as “our babies.”

“In the 20 years I’ve lived here, even though there are owls around here, I have never had anything that close in my yard,” Kloser said. “It’s an incredible gift.”