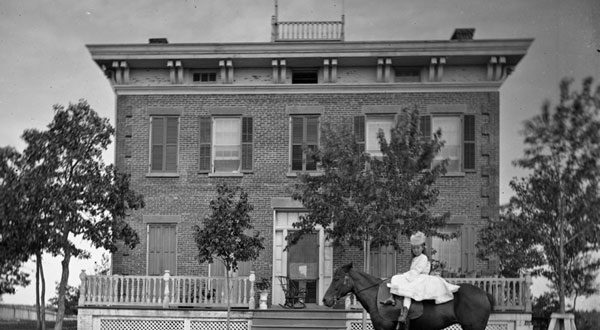 The rise and demise of ‘Broadacres’

The young lady on horseback is probably Josephine McKenty, posing in front of the fine home that her father built on the shore of the lake he renamed Como. Photo courtesy of Minnesota Historical Society

The mid-1850s was a boom time in and around the hamlet of St. Paul, Minnesota Territory, and at the forefront of the action was a genial, energetic, wiry little man named Henry McKenty.

He was known by the nickname of “Broadacres,” for his practice of acquiring and selling large parcels of property in a period of wild speculation and loose money. At one point, he was said to own more Minnesota land than anyone else.

McKenty planned to create a resort community at Sandy Lake, so he came up with a new name for the weedy pond—Lake Como—to conjure up the image of the picturesque original in northern Italy. To encourage development, he financed the construction of a road to the lake from the city limits at Rice Street. (He platted his Como Villas development on the south end of the lake, much of the land later becoming part of Warrendale.)

In August 1857, the bubble burst. A New York insurance company went bust, triggering a panic across the nation that eventually crushed the economy and many of those who had been riding the boom, including McKenty.

It had been a giddy run while it lasted.

In the mid-1850s immigrants bound for the newly opened land west of the Mississippi River flooded in from the East, reaching Rock Island, Ill., by train and then taking a steamboat up river to St. Paul, the last stop. In summer 1855, one steamboat company alone deposited 30,000 people at the levee at the foot of Jackson Street. Many kept moving west, but others stayed and the town of less than 5,000 struggled to accommodate them.

McKenty himself was a relative newcomer, having made a dramatic arrival in 1851.

As the story goes, McKenty requested a room at the American Hotel, one of the best in the hamlet. He was shown to a small room in the attic, which he declared to be unacceptable for “Col. Henry McKenty of Pennsylvania, a friend of Gov. Ramsey’s.”

“I don’t care if you are the brother-in-law of the pope, I have no other room for you,” replied the landlord. With that, McKenty walked to the front of the office, drew a revolver from his pocket and fired two shots through one of the front windows. Satisfactory accommodations were found for him.

Once established in business, McKenty fiercely defended his interests. For example, after learning that someone was trespassing on his land near Mankato, he headed there by steamer.

He brought a casket with him and had four men carry it to the door of the claim jumper’s cabin. Gun in hand, McKenty suggested to the man that he would be occupying said casket if he didn’t immediately depart, which the trespasser proceeded to do.

During the craze, land originally valued at $1.25 per acre soared to as high as $15. McKenty held several thousand acres of prairie land in Washington County for a year or so and cleared $23,000 on the sale. He and others loaned money at an interest rate of 5 percent—per month.

In the 1890s, an old settler recalled the real estate men of those earlier days for the St. Paul Globe: “A large share of them were purely street sharpers, having no office but the sidewalk and no capital but a roll of townsite maps and a package of blank deeds, yet all fairly coining money and spending it, in many cases, as rapidly as made on fast horses, fast women, wine and cards.

“The operators would board boats on their arrival or hang around hotels, and by a little maneuvering … find out and manipulate strangers …. and fleece them of their means by selling them lots in moonshine towns for several hundred dollars each, not actually worth as many cents, even if they got a title at all.”

However, the old-timer acknowledged there were “honorable exceptions,” and named McKenty chief among them. Another newspaper writer agreed: “One thing set him apart from other land speculators—he was not a swindler.”
The writer added that McKenty’s funding of the Como road exemplified his sense of community, and “he always had a sympathetic heart and a helping hand for the poor and unfortunate.”

As the financial crisis that began in 1857 deepened, McKenty’s business began to fail, his inventory of land steadily losing value. He pieced together a small stake to invest in the new Pennsylvania oil fields and briefly tried his luck in California.

All was for naught, and by the summer of 1869 he was back in St. Paul, in such reduced circumstances that he and his family had to move in with friends.

Despondent, McKenty took his own life that August at age 48.

Recognizing the cost he had borne for the Lake Como road, the state Legislature awarded $5,000 to his grieving widow, Johanna. But the family’s sorrow hadn’t ended. The youngest McKenty daughter, also named Johanna, died of an unknown cause at age 16 in 1879. A year later, the surviving daughter, Josephine, discovered to her grief that her mother had hanged herself in the kitchen of their home on Wabasha Street.

Eventually, Josephine, a schoolteacher, may have found happiness when she moved east and married a wealthy Philadelphian.

The section of Jessamine Avenue in the Como area was once named McKenty Street, for the man who made and lost a fortune “selling dirt,” as he put it.

How the West was bought

Henry McKenty and his fellow speculators, as well as farmers, timber companies and others, acquired what had been federal land with military warrants.

These certificates entitled each veteran of every war from the American Revolution through the Mexican War of 1846-48 to 160 acres of free land, officially valued at $1.25 per acre.

Initially, the land had to be within a federal military reserve and the warrants were nontransferable, requirements designed to encourage veterans to settle along the “Indian frontier.” But by 1852, both stipulations had been dropped, leading to widespread trade in the scrip.

In his book, “Minnesota, A History of the State,” published in 1975, Theodore C. Blegen tells us that many veterans in other parts of the country sold their warrants to dealers and agents in Minnesota for as little as 10 cents an acre.