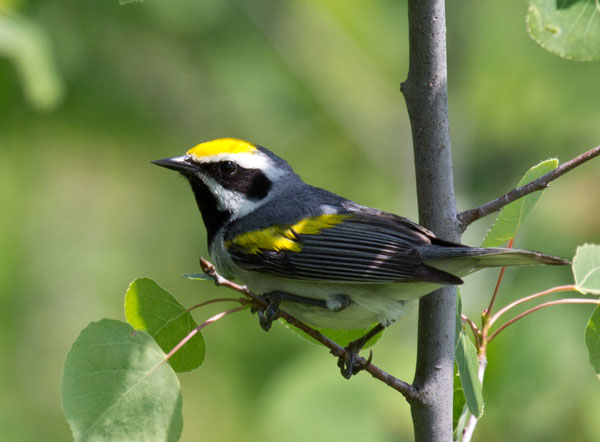 The sight of a golden-winged warbler was his karmic reward

On a Monday morning in July, I went with several of my birding friends to see what birds we could see and hear in Lake Elmo Park Reserve. Our little group averages about six members. Each week a different person is the “decider,” and on this day it was Juke. He had chosen the site, a start time of 7:30 a.m., and the route: a 3.8-mile hike around Eagle Point Lake. And he gave the following advice: “Bring water, sun protection, bug protection and mood protection.”

I took Juke’s final admonition about mood protection to heart. I don’t think he specifically targeted me, but in past outings at Lake Elmo Park, I’ve gotten grouchy about the long hike. I’ve complained about it being a Bataan death march. We’ve had flooded trails, brushy detours and hosts of mosquitoes. I’ve been a classic whiner!

So I decided this time I was going to adjust my attitude and try to enjoy the morning without complaining.

Lake Elmo Park Reserve is in Washington County, a mile north of I-94 on Keats Avenue.

The trail around Eagle Point Lake is mostly dirt and mown grass, with an occasional pile of horse manure just to make sure you’re not always looking up. The trail leads through wooded areas, prairies and along ponds. There are several side trails to get you down to the lake.

As usual on most birdwatching trips, we heard more birds than we saw. Although a green heron flew over and gave a squawk to make sure we heard and saw it. We heard a pileated woodpecker whacking away on a tree in the distance.

And we heard many eastern wood pewees. This is a small gray flycatcher that sings its name: “Pee-o-wee,” followed by a descending “Pee-o.” What a sweet call, a sweet bird.

One pleasure of the morning was a chance to compare the calls of a couple of different wrens: the sedge wren and the marsh wren. Both species occur in the park. The sedge wren sounds like an old-fashioned treadle sewing machine. The marsh wren’s song starts with a couple of sharp notes, gurgles for a bit and ends with a rattle. The two wrens look very much alike. They’re both very secretive and often sing from a hidden spot. A general rule of thumb is that if you see or hear one of these birds in a meadow, it’s a sedge wren. If you’re near a wetland, it’s probably a marsh wren.

The vireo family of birds is another group more often heard than seen. The red-eyed vireo seems to be the most common around here. Its song is a question-and-answer style that goes on and on, a rising phrase followed by a descending one. “Here I am, over here.” And it usually sits stock still while singing.

Another vireo we heard was the yellow-throated vireo. Its song sounds like “Three-eight,” rather hoarse and raspy.

And the third vireo in the morning’s vireo trilogy was the warbling vireo. This one sings very long phrases. To me it sounds like it’s saying, “If I see you, I will seize you, I will squeeze you till you squirt.” How do they come up with these mnemonics? It helps me remember the song, though.

But the bird of the morning for me, and I think for the others as well, was the male golden-winged warbler that Val found foraging in some trees along the trail. It stepped out onto a dead branch and sat in full sunlight, giving us great looks. It has a golden crown, a dramatic black mask and throat and a wide golden wing patch. This is a bird I don’t get to see every year and when I do, it’s usually in the spring as they’re migrating north.

The golden-winged warbler’s summer range in Minnesota starts north of the Twin Cities and extends up toward the northwest part of the state. So this male was probably already heading back south by mid-July. They winter from Guatemala to Colombia.

Finding this bird highlights one of the things I like most about birding: the serendipity. You never know what you’re going to see. I sure didn’t expect to see a golden-winged warbler that day. I had been on my best behavior all morning and never made a peep about the rugged trail and its many challenges. So I’m going to conclude that seeing the golden-winged warbler was a karmic reward for my attitude adjustment. But maybe it wasn’t. Maybe it was just a serendipitous event. Who knows? In any case, I had a better time that morning because I had set my mind to having a better time. Call that karma, Zen, or mind over matter, it worked for me and I’m going to try it more often.

Clay Christensen lives and writes in Lauderdale. His book, The Birdman of Lauderdale, is available at local bird stores, bookstores and BirdmanBook.com.