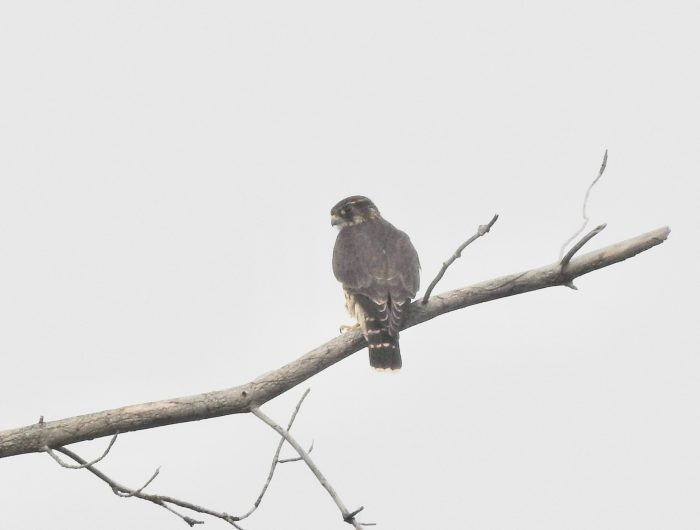 On a recent morning outing with my newly adopted pup, Rocky, I saw Tamara and her dog, Marshall, approaching from down the street.

As the two dogs were getting acquainted, Tamara told me there was a bird in a nearby tree eating another bird! She offered to show me. No persuasion necessary!

We walked our dogs to the foot of the tree, maybe 50 feet away. And up in the tree, on a big limb, was a dark bird working on what looked like a mourning dove, pulling feathers off and letting them drift down. I looked at the feathers collecting below the tree and confirmed they looked like mourning dove feathers.

I told Tamara that I thought that the bird doing the eating was a merlin. I had seen one just less than a month earlier at the tippy top of another tree across the alley.

I was able to get my binoculars on that one and identified it as a merlin. That was the first merlin I’d seen in the neighborhood.

I saw what I thought was the same treetop bird about two weeks later sitting on a telephone wire in the alley behind my house. The thin white bands on the tail were clearly visible. I judged it to be a female, who had her back toward me.

Tamara noted the merlin didn’t seem to be at all affected by us and our dogs standing around under the tree. Merlins seem to be quite tolerant of humans until one starts climbing their nesting tree.

Merlins have long, hooked talons and feed on small birds and rodents. They usually attack their prey in flight, knocking it out of the air at 30 mph, then dropping down on it to finish it off with a bite on the neck. There’s a hint of Transylvania there.

My friend Val witnessed a bird-on-bird attack near her home in the Como Park area. She was standing in the street with a neighbor. The snow the night before had reduced the morning traffic. Across the street, in the park’s woods, there was a mobbing going on; not people, but birds were harassing some predator. There were blue jays, crows, chickadees and others, all in a loud rage.

Suddenly a dark-eyed junco flew out of the woods. Immediately another bird flew after it, hit it and knocked the junco to the street. The attacker settled down on the junco, spent a few moments getting its grip, then squeezed it, picked it up and headed away. Val had time to see that it wasn’t an accipiter (a genus of birds of prey), like a Cooper’s or sharp-shinned hawk. She identified it as a merlin. She had never seen one in the neighborhood before.

During nesting, the male will bring up to three birds a day to the female while she’s incubating the eggs and over nine birds a day once they have nestlings. If she doesn’t take the food on his arrival, he’ll cache it. And, if he doesn’t deliver some morning, she’ll go retrieve the cached food herself. It’s nice to have a pantry.

Like owls, merlins cast (i.e. “spit up”) pellets of feathers and skeletal remains from the previous day’s meals.

Merlins nest in northern Minnesota and in the metropolitan area. Most of them prefer the cooler, northern ranges of the globe. They breed in Alaska, across Canada and from Iceland to eastern Siberia. They’re what’s known as a Holarctic species (inhabitants of the northern continents).

Merlins usually use nests that were built by hawks or crows. They have to fend off predation by crows, peregrine falcons, great horned owls, Cooper’s and red-tailed hawks. They tend to select nest sites with a good view of the surrounding terrain, but rarely use the same nest two years in a row.

Merlins are rare winter visitors to Minnesota. Most have migrated to the south-central United States or northern Mexico. But some find shelter in conifers in resi­dential areas, school yards, parks and cemeteries. And there’s high prey abundance in cities (think house sparrows!).

I think the merlin I saw in December and January was the same bird, wintering over somewhere near our neighborhood. Maybe in the Como Woods over by Val. It was an intrepid bird to take on a Minnesota winter when the rest of her kind had high tailed it to southern climes. I’ll watch for her next year.