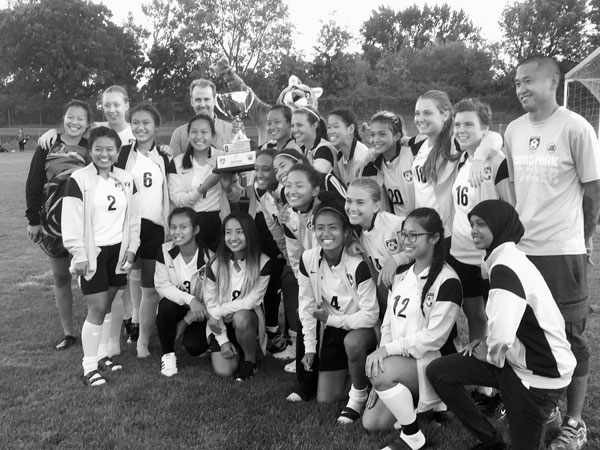 The popularity of soccer in St. Paul is peaking with huge participation numbers in the schools and the anticipation of Major League Soccer. The inaugural Mayor’s Cup soccer matches were held at Como Park High School Sept. 16. The Como girls display their trophy.

Mayor Chris Coleman has seen his share of high school soccer games. His son played in the St. Paul City Conference at Highland Park High School, which brought the mayor to the sidelines of the city school soccer fields, including Como Park.

I was privileged to serve as the Como Park boys soccer head coach for 10 years, culminating with our team’s 2013 state championship in my final season leading the program.

The joy and pride that undefeated Como Cougar state championship team brought to our school and community was special beyond words. From the roars of fans in the Metrodome, to the victory reception at school and the ceremonies in the weeks and months that followed, Como soccer felt the love.

The Como boys team displays their trophy from the Mayor’s Cup.

Perhaps more powerful was the proclamation’s concluding statement: “Whereas we commend Como Park Boys Soccer for uniting the diverse cultures of St. Paul together through the beautiful game of soccer.”

Fast forward to Aug. 19, 2016. In front of an enthusiastic throng of soccer supporters and dignitaries, with the opportunity to formally welcome the Minnesota United (MNUFC) professional franchise to Major League Soccer and its soon to be built St. Paul stadium, the mayor spoke of Como soccer again.

Recalling our 2013 state championship team, Coleman spoke of our diversity, the multiple home languages of our players and what we accomplished together.

Como connections continue in the capital city with one of our own serving as the messenger for MNUFC. Eric Durkee from Como’s class of 2004 is the club’s communications director. Durkee was an elite player in high school and also an exceptional student I had the pleasure of teaching in Advanced Placement Government and Politics.

Today, Durkee’s role keeps him extremely busy and plugged into a world where communicating the details of stadium deals in his hometown are his daily duties. Adept and talented, he’s enjoying representing Minnesota’s newest major league team in the media.

“I couldn’t be more proud to have grown up in St. Paul and to play an active role in helping the community and city I love to fully embrace the sport I love,” said Durkee.

He added that the organic growth of the game in St. Paul has been tremendous. In 2004, neither he nor I could imagine the sheer volume of kids playing soccer for their schools.

This is now my third season of coaching my own daughters and their friends at Murray Middle School. There are 40 girls participating. The Murray boys have more than 50.

Collectively in the St. Paul Public Schools (SPPS), there are approximately 400 boys and 300 girls playing soccer for their middle schools. At the high school level, numbers are similar for the girls. High school boys in SPPS approach 500 with multiple levels of teams at each school.

Soccer is by far the most popular sport offered in SPPS with participation rates that keep climbing. Nowhere is that more evident than Como.

Jonah Fields was my hard-working and loyal junior varsity coach for seven years. Now in the middle of his third season as the Cougars’ head coach, he administers a program with 80 players on four teams.

Fields has taken Como back to the state tournament in each of his first two seasons, remarkably making it four consecutive state appearances overall for the program. Above and beyond getting his teams to play at a premier level by play-off time, Fields has also taken community outreach and promotion of the Como Soccer program to new levels.

Como soccer players volunteer through Northwest Como Rec Center to coach and build relationships with the youngest players in the community. High school boys and girls recently led fun soccer activities on a Saturday morning under the guidance of Fields and Como girls coach Kyle Johnson. That was followed by “Community Day” where the same Northwest Como youth were invited to see the varsity boys and girls doubleheader at Como.

Then there’s the Mayor’s Cup. Linking Mayor Coleman back to Como, and celebrating the game of soccer at its grass roots level, Fields created the first annual Mayor’s Cup held at Como on Friday, Sept. 16.

The Como girls hosted the Humboldt Hawks for a game at 3:15 p.m. The Como Boys followed with a game versus the rival Hawks at 5 p.m. A brand new traveling trophy awaited the winner of each game. Coleman was excited to be on the sideline, watching high school soccer once again, with the new twist of waiting to present a Mayor’s Cup to each winning side.

As it turned out, the mayor and his family were grieving the loss of his mother-in-law and the Friday game conflicted with the funeral. City Councilmember Chris Tolbert stepped in to speak on Coleman’s behalf with a mention of the Mayor’s Cup moving to the Midway in a couple of years. The new Major League Soccer stadium there would be a fun and fitting stage for this exciting high school rivalry game.

Humboldt will try to earn the prizes when they host the event in 2017. But as for the inaugural 2016 games, the Cougar boys and girls each earned victories to take “The Cup.”

It was another fun day of soccer in the city. Soccer provided the opportunity for people to come together around a shared passion. Through the game, new relationships continue to be developed with others in the community.

We have thousands of kids representing their schools with peers from all walks of life, playing the world’s game right here in St. Paul. Soccer is indeed soaring at Como and throughout the capital city, blessed with the enthusiastic support of St. Paul’s soccer loving mayor.