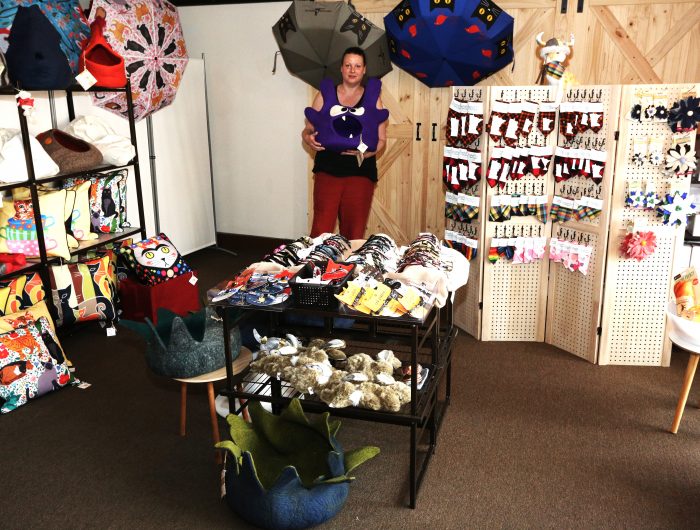 This retail boutique is the cat’s meow 

The stress of a divorce, the pandemic and career transition had left Nikki Christopher depleted in more ways than one.

After 30 years as a professional harpist and private music teacher, she knew that she wouldn’t be able to support herself post-divorce as a musician.

“I knew I was making a new start,” Christopher said, “and I decided to do something that’s absolutely ridiculous, silly and fun … I get to start over. What do I want to do?”

For this longtime lover of felines, launching a cat-themed boutique was the answer.

In 2019, Christopher’s cat Stitches became the first cat to join the airport’s Animal Ambassadors program. As a therapy cat in a field dominated by dogs, Stitches captured the attention of media outlets around the world and delighted travelers passing through Terminal 1.

Once COVID hit, Christopher stopped bringing Stitches to the airport but continued to assist travelers as a Go Guide volunteer. Now well-known by airport employees as “the cat lady,” it was during this period that staff suggested she open a kiosk featuring cat gifts. Christopher liked the idea and also hoped to bring Minnesota-made cat products to the airport.

In preparation, Christopher enrolled in business classes, worked with a small business mentor and got certified through the Metropolitan Airports Commission’s Disadvantaged Business Enterprise program. Inventory was piling up in her home when Christopher got a call in December 2021 that the kiosk program was ending.

Disappointed but still determined, Christopher took her goods to the Minneapolis Holiday Gift Boutique to get feedback about her business.

“People were really excited about it,” Christopher said, so she continued participating in other events like a cat show and the Walk for Animals. The sales results encouraged her to push forward with opening her business.

“People were buying armloads of stuff … so I was like, I have to do this,” Christopher said.

Christopher started looking for a storefront in January but had trouble finding a landlord who would grant her a lease without three years of business history. This limited track record also made getting a loan unachievable.

“It was like, you can’t start because you haven’t been there already,” Christopher recalled.

But then an opportunity arose in Milton Square: Studio Karlor, a boutique and gift shop, was looking for a sublet tenant and owner Karlie Schraufnagel offered the space to Cat aMEWsement.

“I keep telling Karlie that she made this happen,” Christopher said. “She’s excited that something fun is in there and that she’s helping a woman start a small business.”

Cat aMewsement is like “the cat version of Patina,” Christopher said, referring to the Twin Cities chain of gift shops. It features unique handmade items for cats but also carries cat-themed goods for humans like jewelry, art, mugs and greeting cards.

Christopher buys directly from artisan designers when possible and said the store’s wool toys and cat caves have been particularly popular.

“I find things that make me giggle,” Christopher said of her inventory — items like catnip tortellini and crinkle toys shaped like pancakes.

The holiday season is going to be special, Christopher added, describing a collection of Christmas tree caves, cat tree garland and toys shaped like dreidels, peppermint candies and snowmen.

“You’re not going to find this stuff anywhere else,” Christopher said. “Most of this stuff is not on Amazon and none of it is at Petco or PetSmart.”

After a stressful few years, Christopher is now “having loads of fun,” she said. “People come into the store and they giggle and they point, and that’s exactly why I’m here.”

Cat aMEWsement, located at 2238 Carter Ave., is open from 11 a.m. to 8 p.m. Tuesdays through Saturdays and from 11 a.m. to 6 p.m. on Sundays. Meanwhile, you can shop online at catamewsement.com.