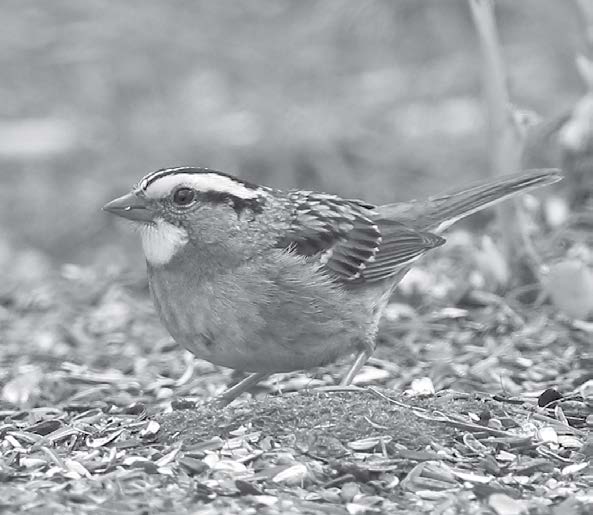 As I get older, I get less and less excited about winter coming. Most of the birds have flown south. They eat bugs and there aren’t many bugs out and about in the winter.

But there is at least one species that warms the cockles of my cold Minnesota heart and has special meaning to me: The white-throated sparrow. This is a bird more often heard than seen, although when it’s seen, it’s usually in a quick glance when it pops up, flies a short distance and then drops back into the ground cover.

When you walk on a woodland trail in the fall, you’ll often hear little notes coming out of the undergrowth. These are contact calls: “I’m over here. Where are you?” Peterson’s Field Guide of Eastern Birds describes white-throated sparrow contact calls as a slurred “tseet” or a hard “chink.”

You’ll also hear this year’s newbie white-throated sparrows practicing their very well-known song. It consists of clear whistled notes that ascend or descend. The ascending melody starts with one note followed by a set of triplets about a third higher. There can be two or three sets of triplets.

The descending song starts with a pair of notes, the second lower than the first, and then the two or three sets of triplets about a third below the starting notes.

White-throated sparrows are one of the few birds that sing at night. Apparently, lumberjacks in northern Minnesota used to listen to their song as they were lying on their bunks thinking about their Scandinavian homeland and found it very mournful. They nicknamed the sparrow the Loneliness Bird.

The white-throat sparrow has a striped head, a white bib lined in black and a yellow dot between the bill and the eye (called the lores). The eyebrow stripe comes in two “flavors,” in what is known as plumage polymorphism: There’s a white-striped version and a tan-striped version of the eyebrow stripe, or “supercilium,” if you want to impress your friends and neighbors.

There’s more to this difference in eyebrow color than just good looks. Studies have shown that males of both color types prefer to mate with WS (white striped) females, whereas both kinds of females prefer TS (tan striped) males. WS sing more, are more aggressive and are more likely to engage in extra-pair copulation. TS birds provide more parental care than WS birds.

White-throated sparrows breed in the boreal forest across Canada, the northeastern United States and the Great Lakes, including northern Minnesota. They nest on or near the ground in a site chosen by the female, usually at the edge of a clearing, well concealed.

These birds pass through the Twin Cities metro area on their spring and fall migrations. The fall migration period is mid-­August to mid-November with a peak in early October. They’re short distance, nocturnal migrants. They winter east of the Great Plains. Some do over­winter where there are bird feeders; they’re usually reported on the Christmas Bird counts in the metro area.

White-throated sparrows forage on or just above ground level. They seem to like to be close to shrubbery, hopping out of it to scratch with both feet in a backward double kick. They move forward with a double wing flick, so quick that it’s barely visible. They usually stay within two or three feet of the shrubbery to allow for a quick escape in case of danger.

They frequent small openings in dense thickets where leaf litter covers the ground. It’s been pointed out that they are reducing the risk of predation at the expense of foraging efficiency.

In the winter, these sparrows forage on small seeds, such as ragweed and smart weed, fruits and berries, including sumac, grape, highbush cranberry, mountain ash, rose hips, blueberries, raspberries, bunchberries and dogwood.

White-throat sparrows have a special place in my heart. As many of you know, my wife, Jean, passed away this September. She suffered from Alzheimer’s disease for some eight years. One of our favorite movies was “Strangers in Good Company.” It’s about a busload of elderly women that gets stranded overnight in the Canadian back country.

A couple women go out to look for birds and one of the women says, “We used to hear white-throated sparrows here all the time. We don’t hear them anymore.”

But the birds are singing in the background; it’s just that she doesn’t hear them anymore. A poignant scene, very touching.

For me, Alzheimer’s was a long goodbye, like the onset of hearing impairment, gradual without noticeable changes day to day. But the white-throats were still singing in the background. Rest in peace, my Love.