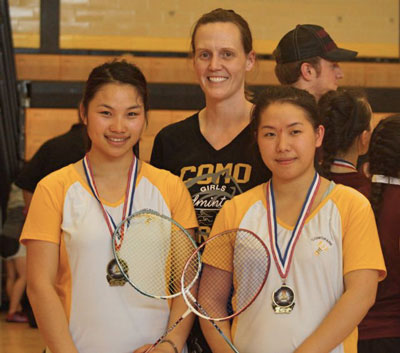 Before graduating from Como Park High School, seniors Kia Vang and Sheng Vang dreamed of adding an achievement they could carry with them into the rest of their lives, along with their diplomas.

They worked hard through many badminton seasons to get their chance, and on May 14, they triumphed in the Minnesota State Badminton Tournament, winning the doubles championship.

After earning the St. Paul City title the previous week, the girls kept the momentum going through state, defeating a team from city rival Johnson in the state final. A Pioneer Press story featured the Como team on a front-page photo, with several quotes from Kia and Sheng about their accomplishment.

As reported in last month’s Bugle, Como junior Trevon Clay was also chasing a dream. He cruised through the Section 4AA track meet, qualifying for state in three events: the 110-meter and 300-meter hurdles and the long jump.

His hurdling times during the season indicated he had a chance of medaling in those events at state if he ran his best races. He did.

Clay’s preliminaries qualified him for the finals in both races. He came up just shy of the long jump finals, but was able to put all his energy into the hurdling finals on June 5 at Hamline University, claiming third in the 300 meter and crossing the finish line first in the 110 meters to claim the gold medal.

Trevon Clay made the most of his moments and proudly represented Como Park on top of the podium as a state champion.