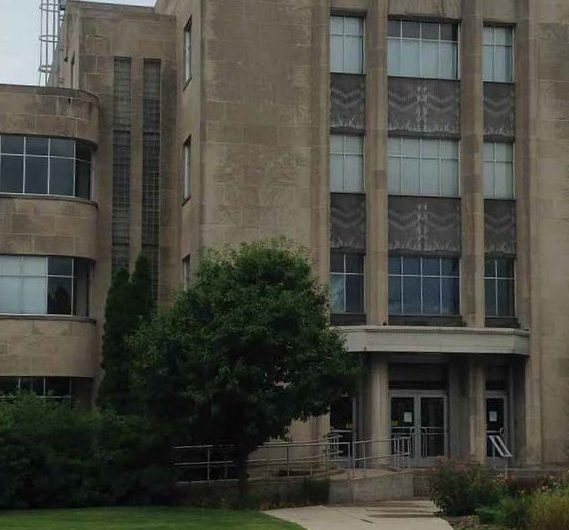 The Falcon Heights City Council has rezoned the TIES office building property at the southwest corner of Larpenteur and Snelling avenues for residential use.

Minneapolis-based Buhl Investors, which owns the property, plans to renovate and convert the interior of the art deco structure into a 106-unit apartment complex while preserving the historic exterior of the building.

Buhl is calling the project Amber Union in honor of the building’s history as headquarters of the Farmers Union Grain Terminal Association. At a city planning commission hearing in May, Buhl principal Peter Deanovic showed slides of interior features that the developer intends to preserve, including wood paneling in the executive suite, stone floors, and an auditorium where Walter Mondale and other notables addressed crowds.

The property under consideration for interior renovation includes the main building, at 1667 N. Snelling Ave., and the annex immediately to the west, both built in 1947. The buildings were most recently occupied by the TIES educational software company, which installed large generators and other mechanical equipment south of the main building.

Buhl proposes to remove the mechanical generators; they will also reconfigure parking lots and pave some of the existing grassy areas to accommodate tenant parking. With that exception, the developer expects to keep the exterior of the two existing buildings substantially intact and is working with the National Parks Service to meet historic preservation guidelines.

Inside the two TIES buildings, Buhl Investors proposes to erect 106 units of affordable rental housing in a mix of sizes and layouts. In the annex, they plan a small retail area with possibly a coffee shop or other community gathering space.

Buhl purchased the parking lot west of the annex as part of the real estate parcel, but that is not included in the current rezoning and development plan. Deanovic said Buhl expects to allow continued use of that lot for parking until some other opportunity arises.

Pending approval of, among other things, bonds and historic preservation plans, Buhl expects to begin construction on the housing project in early 2020.

Initially, Buhl Investors planned to maintain the TIES property for office use. But after several months searching for office tenants, Buhl Investors concluded the property isn’t attractive enough for that continued used and faces a lackluster market partly because growing numbers of businesses are letting employees telecommute and work from home.

So, in spring, the developer changed course and asked Falcon Heights city staff for help in assembling financing that would enable it to convert the TIES campus into affordable housing. The city is applying for conduit bonds on behalf of the developer and is also supporting grant applications for historic preservation and other opportunities connected with the site. Conduit bonds are allowed, with state approval, for affordable housing projects. They do not expose the city to liability; the risk is assumed by the bond buyers and the developer.

At a May 28 meeting of the Falcon Heights Planning Commission, Deanovic presented the development plan and sought the commission’s support for a PUD (planned unit development) designation that would change zoning on the site from commercial to multifamily residential and allow the project to move forward.

At the commission meeting, neighbors raised concerns mostly about traffic and parking. Some citizens also voiced concern about the extended hours of noise from housing compared with office use, and the possible need for added policing.

In answer to a question about whether Buhl would remain involved in the project as a manager or sell the completed project, Deanovic said, “We will be long-term stakeholders . . . north of 15 years.”

Ultimately, the planning commission voted to support the developer’s application for a PUD zoning variance, contingent on it providing a detailed security plan and that it consider retaining trees on the east side of the main building.

Anne Holzman is a regular contributor to the Park Bugle.