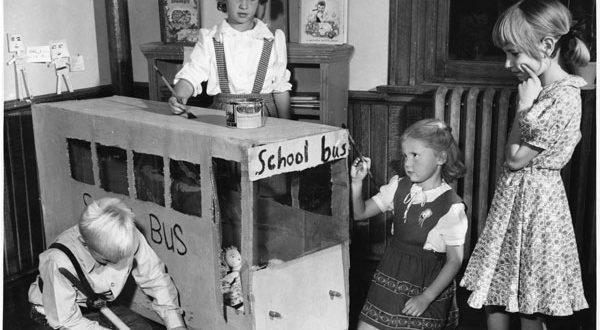 ‘Tilden Spotlight’: a snapshot from 60 years ago

The old elementary-school newsletter is yellowing, but the typewritten and mimeographed pages provide an informative and often-entertaining peek at the life and times in the Como area shortly after World War II.

Joan Mieloch of Lauderdale, a childhood friend of mine, passed on a copy of the “Tilden Spotlight” from June 1951. Members of the last pre-Baby Boomer generation, we were just finishing kindergarten at Tilden at the time.

Until it closed in 1974, the K-8 school was located for nearly a century at Arona and Albany streets, just northeast of the intersection of Como and Snelling avenues. Today a small park occupies its former site.

But in 1951, Tilden was a bustling place, as the last edition of the “Spotlight” before summer vacation clearly showed.

Early that June, an evening open house featured a concert by the Tilden Band, with refreshments, including cookies and shortcakes made by the eighth-grade girls as part of a home economics demonstration.

In an upper-grades track meet, Ralph Bevers used a unique headfirst technique to win the high jump, clearing the bar with a mighty leap of 3 feet, 10 inches.

And members of the Tilden school patrol marched in a parade in downtown St. Paul and rode the streetcar back for the citywide patrol picnic in Como Park. There, Lorene Thompson, Tilden’s patrol captain, won a new bike.

On a somber note, it was reported that Tilden graduates George Moncrief and Edward Clark, friends from childhood, recently had died together in Korean War combat.

Tilden students built their version of a school bus in 1948.

The “Spotlight” editor was Leo Snyder, the eighth-grade class president. The newsletter’s adviser, Mr. Panushka, also his teacher, appears to have given Snyder a relatively free hand and the young man’s wry humor comes through. It was particularly on display in what presumably (no byline) was his crafting of the “Eighth-Grade Prophecy,” looking far out to the year 2001.

There are plenty of inside jokes, some so inside as to be inscrutable to the Reader of the Future, but others not.

Joan Loveness and Bruce Hallen apparently were fond of one another, for example. Our sage, “peering into the mist of tomorrow,” sees them getting married. “Joan blows up tires at Bruce’s filling station. They say that they were scolded for gassing so decided to put it to use. Thus the filling station. They have four little grease monkeys.”

The sage continues, “Ray King is proving his old teachers wrong. They said he would never do anything big. He runs a factory making elephant sweaters.”

And the teaching staff was not spared: “I spotted a silver-haired lady. It was Miss Christensen, who retired on her funds resulting from the sale of marbles collected from innocent third-graders.”

The newsletter also included class-by-class reports on the year gone by, including one by Mrs. Barnes, our kindergarten teacher. It seems we planted an indoor garden, raised two moths and acquired a turtle, news to me.

In a portent of things to come in an age when many households in the area were getting their first TVs, the combined sixth- and seventh-grade class appeared on WTCN (now KARE 11) television. The station was said to be evaluating the use of the medium for education.

The “Spotlight” carried advertising, which showed how many places there were to buy groceries in the neighborhood in those days.

Over on Como, for instance, there was Haggerty’s Dairy Store at 1556 Como and the combined Le Clair’s Grocery and Aschenbach’s Meats at 1562, about where Café 99 and J.O. Thompson Flooring are today. To the north, at Albany and Arona avenues, where Chelsea Printworks now does business, there was Tilden Foods and Meats. (My mother bought a carving knife there that I still have.) At 1341 Pascal St., just north of Midway Parkway, in the building in which Delicata Pizza and Gelato is now located, the Lorenz Food Market operated.

And no more than a block away, up the hill, there was the Frankson Grocery and John Olin’s Meat Market, at 1458 and 1450 Frankson Ave., respectively.

But there was also an ad that signaled the beginning of the end for that neighborhood shopping era. Foodtown, “Midway’s Newest and Finest Super Market,” was opening at 1546 Como, today the site of the Shanghai Market.

I remember the grand opening of Foodtown because they gave away balloons. Very impressive to a 6-year-old.

Six school patrol boys at Tilden caused a minor furor when they walked off the job in 1941.

Their complaint? Unlike previous years, they had not been provided with passes to the Shrine Circus.

R.F. Koessler, school principal, was unimpressed and suspended the boys, an action that he said was “permanent, as far as I am concerned.” He allowed them to continue in school, however.

Lt. Frank Hetznecker, St. Paul superintendent of school police, said it was the first time anything of the sort had happened in the 20-year history of the patrol force.