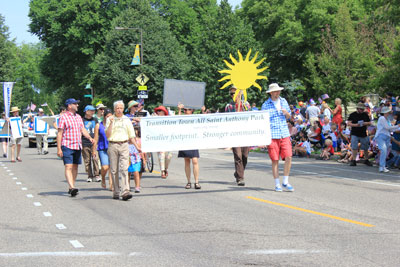 Members of the Transition Town group marched in the Fourth in the Park parade in St. Anthony Park this summer.

Congratulations to Transition Town All St. Anthony Park, which won the most votes in the Saint Anthony Park Community Foundation’s 15th anniversary grant challenge. The winner was announced at an anniversary party for the foundation at Urban Growler Brewing Co. on Sept. 19.

To celebrate 15 years of serving the community, the foundation announced the competition in May as a way to encourage fresh ideas for neighborhood initiatives. The foundation will grant $5,000 per year for three years to Transition Town, a group that was established two years ago to work on economic and infrastructure resilience in the community as it faces challenges associated with global climate change. The group has already begun looking into creating a community-owned solar garden, local food production and preservation, and more.

The grant will support broader community participation and communication through social media, Internet outlets and print. St. Anthony Park residents and business owners voted online through Aug. 31 for one of three organizations to receive the three-year grant.

Transition Town received 227 votes. The other two contenders for the grants were Shakespeare in the Park, an outdoor community theater project that would provide performing arts opportunities for all ages (it received 160 votes), and Mid-Continent Oceanographic Institute (formerly Rock Star Supply Co.), a nonprofit group at Raymond and University avenues that offers tutoring, writing development and homework help to students ages 6-18 from low-income households (it received 195 votes).

“The foundation looks forward to working with the Transition Town folks to bring our community together and build consensus around their sustainability goals,” foundation executive director Jon Schumacher said. “We also want to work with the other two finalists to help them achieve their goals.”