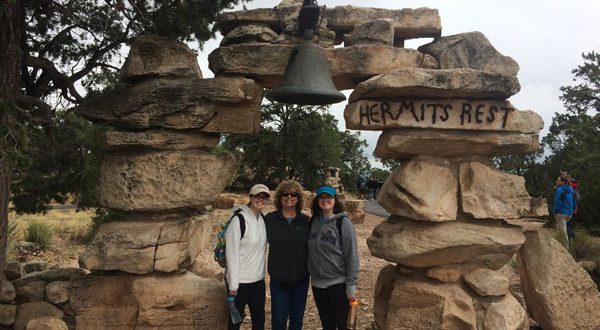 Travel tales: Our summer adventure working in a national park

Have you ever thought about doing something different from your normal routine? Perhaps immersing yourself in an out-of-the-ordinary destination? That is exactly what my daughters and I did this past summer.

It all started over a year ago when I came up with the idea of spending the summer living and working in a national park with my daughters, Margot and Mallory. Since our family is passionate about national parks it seemed like it would be the perfect fit for us. I discussed it with my husband, Jeremy (who would be staying home and working while we were gone), and he agreed that it was a promising idea. We decided that either the Grand Canyon or Yosemite would be the best places to apply. Both of these parks have large villages, so they would have a great need for seasonal employees.

We applied at Xanterra first (which operates most of the Grand Canyon South Rim properties) and by early December we had each received a job offer. We gladly accepted and immediately began to prepare for our summer adventure. We wanted to room together, so I requested one of the historic employee cabins. Since Margot and Mallory are college students, we realized that we would have tight turnarounds on both ends of the summer. We were determined to fulfill the three-month minimum job requirement, so we planned accordingly.

On May 11, we packed our Honda Civic with clothes, bedding and other necessities. We took four days to reach our destination, staying in Overland Park and Liberal, Kansas, then Albuquerque, N.M., and finally Flagstaff, Ariz., on our last night before arriving at the canyon.

When we finally arrived, our passports were reviewed and we completed drug screenings and housing forms. Then we moved into our cozy private cabin, unloaded our suitcases and flopped down on our beds. We were relieved to discover that the cell-phone coverage in our cabin was adequate.

The next few days were spent sprucing up our cabin, purchasing provisions, and participating in food and beverage orientation. Our fellow employees—mostly college students or recent graduates—came from many countries, including Thailand, the Philippines, Columbia, Romania, Bulgaria and Poland. They were thrilled to earn minimum wage since it was a much higher rate of pay than they could expect back home. Most of the middle-aged and retired employees were from the U.S. There were also quite a few employees from the nearby Navajo Nation. Some employees worked at the canyon year-round and raised their families there. It was their home.

We all worked in restaurants. I was a host at the Bright Angel Restaurant, Margot was an attendant in the employee cafeteria, and Mallory was a line server at the Maswik food court. The first few weeks were draining, as we adjusted slowly to our new roles and shoes. We ate lunch together in the employee cafeteria every day. We all walked to work, but I usually rode the shuttle bus home after my evening shift ended at 10 p.m.

Since my daughters and I enjoy meeting new people and learning about different cultures we were delighted to be part of this unique multicultural environment. Each week brought a new crop of interesting employees and more opportunities to make friends. Between the three of us, we knew just about everyone in the food-and-beverage department. Each person who works at the canyon lives in the village so we would see people we knew everywhere we went, just as would happen in any small town. The tourists we encountered were mostly from the U.S. and Western Europe.

The canyon itself is glorious. Although I was familiar with the park since I had been there several times (and hiked to Phantom Ranch twice), I never tired of it. I often walked over to the rim during my breaks and regularly saw elk and mule deer along with their adorable young. And the Milky Way was clearly visible in the incredibly dark night sky.

Most visitors arrived on tour buses and had only a few hours to spend at the canyon. Mornings and evenings were quiet, but each afternoon the village teemed with thousands of visitors from all over the world speaking a wide variety of languages.

On our days off we usually alternated between staying at the canyon and spending time in Flagstaff, the closest city to the canyon. Since we were living in a remote area we developed an appreciation for urban amenities (taken for granted in St. Paul) such as movies, haircuts, outings to Walgreens or Target, and high-speed Internet. We thoroughly enjoyed a weekend in Page (hiking to Horseshoe Bend and cruising on Lake Powell) and another one in historic Williams. We also visited Sedona and the meteor crater near Winslow. We took full advantage of employee perks, including free guided bus tours and travel on the Grand Canyon Railway. We also attended ranger programs, walked along the rim trail, and hung out at the library and rec center.

In mid-August it was time to head back to Minnesota. After packing the car, returning our uniforms, completing the necessary paperwork and many emotional goodbyes, we drove all the way to Phoenix. It was a long and exhausting day. Margot and Mallory flew home the following morning (since they needed to be back to school), and I embarked on the solo drive home. After being at the canyon all summer Minnesota seemed so green and lush. We were all happy to be home.

We certainly accomplished our primary goals of spending quality time together and gaining valuable work experience, especially for Margot and Mallory. And we all developed a deeper and more intimate connection to the canyon. Most important, however, we established relationships with like-minded individuals from all over the world, and from many cultures, who share our spirit of adventure and friendship.

Janet Wight is a resident of Como Park, where she lives with her husband and daughters.