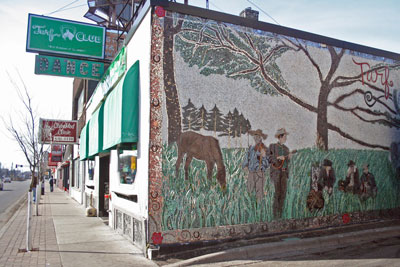 The Turf Club is as much a music destination as it is a food destination on University Avenue, according to its new chef, Karl Litchfuss. Photo by Marina Lang

When the owners of Minneapolis music club First Avenue bought the Turf Club in 2013, they did more than touch up the paint. The brand-new bathrooms and newly exposed racing mural behind the stage are lovely and much-needed improvements, but the renovation also included gutting and rebuilding the once-dilapidated excuse for a kitchen and bringing on chef Karl Lichtfuss to create soulful, satisfying dishes around the clock.

From breakfast to dinner and every minute in between, Lichtfuss and his crew brought classic diner dishes with a Southern influence to this iconic University Avenue music venue, making it a great place to duck in for a quick lunch or to start off the night with a delicious dinner.

Thanks in part to the new and improved kitchen, the Turf Club recently received a Rookie of the Year award from the Midway Chamber of Commerce.

“There is so much history here,” explained First Avenue’s marketing director Annie D’Souza. “We don’t want to fix a good thing, we want to protect this legend and add great food to the mix.” And with the addition of Lichtfuss, who is also at the helm at the Depot Tavern next to First Avenue in Minneapolis, they have.

“Our challenge is to serve food to a large variety of audiences,” said Lichtfuss, whose chef creds include working with Chef Marcus Samuelsson in New York City’s famed Aquavit. “We serve brunch to families on the weekends, lunch to local businesses and late-night snacks to music fans. We want neighbors to come in here and get really good food any time of the day.

“The Turf Club is obviously known as a music venue,” he explained. “But we want people to know it is a food destination, too.”

Litchfuss has come up with a menu he calls Southern diner food.

“We always try to do things a little different, but we stay close to Southern comfort food, too. I want it to be unique, but I want it to be food that people recognize. The specials is where I get to play,” he said.

There are plenty of comfortable tables for a relaxed sit-down meal for lunch or dinner, but on nights when bigger acts might require additional space, tables can be removed and it’s more of a “portable food” game, as Lichtfuss explained. And there is plenty of that to be had. With four types of chicken wings, Ellsworth cheese curds or delicately fried green tomato wedges to choose from, no one should go hungry, even it’s a bumper-to-bumper-crowd kind of night.

Brunch is offered on both Saturday and Sunday, with longer brunch hours than at most places in town. Comforting dishes like stuffed and smothered hash browns are offered until 4 p.m.

As with the regular menu, the brunch menu includes familiar foods with a unique twist. The aforementioned hash browns are a cornucopia of indulgence, with five waist-expanding varieties. Lichtfuss recommends the Hot Brown, which comes filled with roast turkey, bacon, tomatoes and Parmesan cheese, smothered in a rich Mornay sauce. There are plenty of options on the sweet side, too, with buttermilk hot cakes or fluffy French toast drizzled with maple-ginger syrup.

The menu for brunch is loaded with enticing options, but the highlight of my lunchtime visit was the plate of house-cut russet fries, arguably some of the best in town. These beauties were darn near perfect. Sprinkled with sea salt and fried to a gorgeously golden brown, they can almost make you forget the scary clowns lurking in the club’s basement lounge.

Alex Lodner writes about food and community news regularly in the Park Bugle.