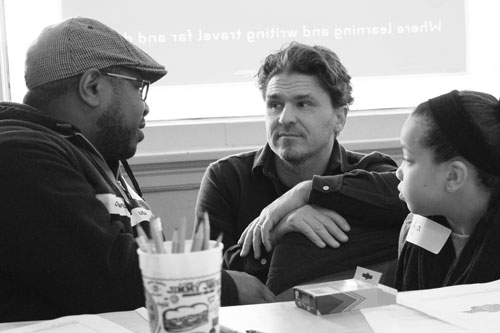 Tutoring center creates a ‘safe place for the craziest ideas’

The man who inspired Mid-Continent Oceanographic Institute (MOI)—a quirky tutoring and writing center for school kids at the corner of Raymond and University avenues—stopped into the shop on Nov. 22 to lend his star power to the nonprofit’s fundraising efforts.

Dave Eggers—a National Book Award finalist and author of numerous books, including The Circle, A Hologram for the King and A Staggering Work of a Heartbreaking Genius—was in town to speak at the National Council of Teachers of English convention in Minneapolis that weekend. Eggers is also the co-founder of 826 National, a network of eight tutoring centers around the country. MOI is under chapter development with 826.

Eggers told the packed crowd of supporters and students who use the services that when he first walked into 2388 University Ave. he “felt the right spirit.” The aim of 826 National is “to create a safe place to learn, a safe place for the craziest ideas, the pure unadulterated wanderings of all kids,” he said.

Polly Norrie, a fifth-grade teacher at Farnsworth Aerospace school on St. Paul’s Eastside, knows just what he’s talking about. She and her class of 27 came to MOI on Nov. 11 for a two-hour field trip that resulted in the publishing of Devin the Rainbow Unicorn’s Sugar Jungle Home, a group effort and a signature piece to what MOI offers: a class comes in for two hours, brainstorms characters as an artist illustrates and the class develops a book. Each child leaves with a skinny paperback, the last part of which is left blank so each student can come up with his or her own ending.

The fifth-grade classes of Norrie and her colleague, Joachim Huber, stumbled into an extended writing workshop after visiting MOI. The nearly 60 students are spending the next few months with volunteers from MOI and MOI board member Marlon James to create the center’s first ISBN-numbered, copyrighted, published book of short stories, poetry and other writings—all written by the Farnsworth kids.

The award-winning Macalester College professor will spend three sessions with Huber, Norrie and their students to help them develop their book. That work will be published in March.

MOI opened in 2013 as Rock Star Supply Co. The organization changed names in the last year. The number of students reached through tutoring both at MOI and at Como Park Senior High School, where MOI volunteers help out each week, has grown to 1,300 and 50 classes have participated in the book-making field trips to MOI.