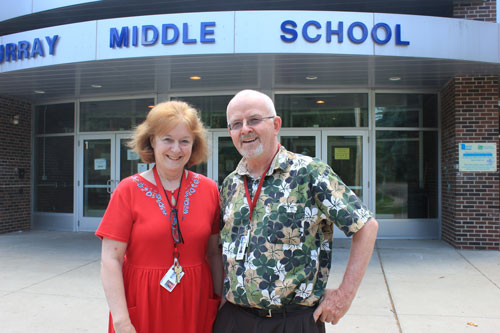 Two Murray Middle School teachers with a combined tenure of more than 50 years in St. Paul Public Schools retired from teaching in June.

Spanish teacher David Donch and special-education teacher Eileen Slagle both spent the bulk of their careers at Murray. Donch spent 27 years teaching in the same classroom in the Buford Avenue building. He joined the staff at Murray after teaching high school English in Venezuela for 11 years.

Slagle joined Murray in 1996 after teaching at Hazel Park Preparatory Academy and in Minneapolis. Slagle taught reading, math and science to special- education students at the school and she served as artistic director for the Murray musicals for more than a decade. She worked on props, scenery and costumes and was behind the foot-powered car built for Grease and the 11-seat moveable boat built for Charlie and the Chocolate Factory.

Both teachers say education can be a rewarding career. “The best part of teaching is seeing the light dawn on a student’s face, when you know he or she understands,” Slagle said. She enjoys running into her former students around town. In fact, she’ll be attending the wedding of one this summer.

“It’s nice to know it all turns out well for kids,” she said.

Donch agrees. He’s seen many of his students do “wonderful things with their lives. It’s very rewarding to see that,” he said.

The takeaway that both teachers stressed: Schools need more parent involvement. If parents pay attention to what is going on inside the schools and talk with teachers, “together we can make a difference,” Donch said.