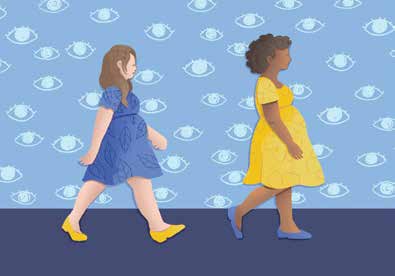 Why a column about white privi­lege from a group focused on climate change?

Because racial justice is essential to climate justice.

We wonder sometimes why we don’t revolt more strongly against impending climate disaster. It may be that our privilege as white people enables us to feel distant from the climate trauma already devastating many people of color, locally and globally. To look at the privileges that distance us may help us acknowledge deeply that we are all one.

These scenes from my own life show just a few of the times my white privilege has been brought home to me.

Shaken by my thoughts

On a college campus where I taught a class some years ago, I saw a young pregnant woman and heard myself think, “I hope she won’t go on welfare.” I cringed. My first impulse was to pretend I hadn’t thought that. Instead, I stopped to lean against a staircase. I had to acknowledge that I’d had that thought simply because the woman was Black.

I was, at the time, a rather poor single parent. I was at risk of needing food stamps, did, in fact, sometimes use a food give-away program. I am White.

At that moment I realized that, if I walked through a college building pregnant, few people (maybe none) would assume that I would become a “weight on the system.” But with my thought, I had projected that attitude onto her.

My privilege: not to be thought of as a likely welfare recipient. My wound: to have gone along with my culture’s encouragement to see some others as problems instead of as people, companions and potential friends.

Years ago, new to any knowledge of Islam, I taught the first session of a world religions course pronouncing the word “Muslim” the way I had heard it in my hometown, the first syllable rhyming with “buzz.” After class, a student came to me and said gently, “I am Muslim. That is how we pronounce the word.” The first syllable, as she spoke it, rhymed with fuss. She didn’t criticize. She just informed me.

I had been too proud to ask. I thought I knew.

Her son, my son

During the half-time break in a night class, a Black student about my age came to me. “Dr. Hanson,” she said, “I’ll need to leave early so I can get home before dark to meet my son at his work and walk him home.”

That day there had been an assault in a neighborhood about as close to my home as hers. “If I walk with him,” she explained, “he is less likely to be picked up by the police.” Her son, like mine, was 16. My son would also be walking home after dark, but I had no fear that the police would question my boy. She was right; they would likely stop hers.

In addition to the privilege my son enjoyed, and my peace of mind as his parent, I had another unearned advantage. I could stay through to the end of class.

Who gets a record?

A Minnesota man I know well had a run-in with the law as a teen. He sold drugs; he was locked up; his father and the sheriff intervened. By agreement with local law enforcement, that event was erased from his record. He is White.

Several of my Black students, male and female, have told me about similar youthful missteps. But none of them had those events expunged; all were living yet with a public, searchable record. Many had probation or parole officers who insisted on meeting with them during class periods.

“Can’t you reschedule?” I’d ask. They’d look at me, an uncomprehending white woman, and raise their eyebrows. Finally, I stopped asking. That White man I know has a job counseling inmates.

The week after George Floyd was murdered

Amina and Hawa, both Somali-­American mothers, spoke to a group gathered on Zoom. Their voices shook as they told us how it feels to raise Black sons. They tell their boys, even as pre-teens, not to bring backpacks into stores, not to wear their hoodies up, to keep their hands away from their pockets when talking to anyone in authority.

Their sons ask why they can’t do what their White friends can do. The mothers explain realities they wish their sons didn’t have to know. They beg the boys to call them when they arrive safely wherever they are going, to answer the phone whenever they call.

At age 16, one son asks his mother for a second ID card. She is confused. Isn’t one enough? No, he needs the second to keep on the dash of the car. The boy understands by then that it would not be safe to reach into his pocket when a police officer stops him.

Ranae Hanson, a writer, taught for 31 years at Minneapolis College, MCTC. Her book Watershed: Attending to Body and Earth in Distress is scheduled to be published in spring 2021 by University of Minnesota Press. Visit her at ranaehanson.com.